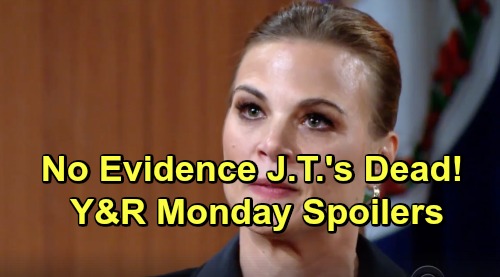 The Young and the Restless (Y&R) spoilers for Monday, March 4, tease that Mariah Copeland (Camryn Grimes) will stand her anonymous tip claims. Michael Baldwin (Christian LeBlanc) will rev up the pressure, which will leave Sharon Newman (Sharon Case) upset. She’ll push Brittany Hodges (Lauren Woodland) to stop this, so Brittany will manage to take over questioning.

Brittany will point out that the women were carrying out a rug, which backs up the closet purge portion of Mariah’s story. Once Mariah’s dismissed, she’ll freak out as she speaks with Tessa Porter (Cait Fairbanks) outside. Tessa will do her best to provide comfort, but Mariah will worry they could both go down.

During the recess, Nick Newman (Joshua Morrow) won’t understand why Michael pushed Mariah and then relented. Michael will argue that he doesn’t want to bring Tessa’s blackmail into this unless he has to. He simply wanted to raise the issue in case they have to drop the bomb later.

Meanwhile, Brittany will warn Sharon about the risk to Mariah and Tessa. She’ll note that Michael could sell them out if it means protecting his clients. Back with Nick, he’ll spot Phyllis Summers (Gina Tognoni) as she enters for her testimony. Phyllis will reiterate that she wants to help the others.

Afterward, Nick will notice Summer Newman (Hunter King) supporting her mom. He’ll object to it, but Phyllis will think she deserves a chance to prove her motives. Once court’s back in session and Phyllis is on the stand, Christine Williams (Lauralee Bell) will hit hard. She’ll bring up the fact that Victoria Newman (Amelia Heinle) once hit J.T. Hellstrom (Thad Luckinbill) as well.

Phyllis will claim she can’t recall that info. She’ll also admit that she watched Nikki Newman (Melody Thomas Scott) swing at J.T. while Sharon stood nearby. Christine will urge Phyllis to demonstrate how it all went down. She’ll point out that J.T.’s back was turned, but Phyllis will insist that he was attacking Victoria. J.T. was a dangerous intruder, so Nikki fought him off.

Christine will note that J.T. lived there and could’ve avoided the front door because Nikki’s car was outside. She’ll find every way possible to turn things around and make the women look guilty. Phyllis will call Christine out for twisting her testimony, but Chris will keep at it. She’ll tell the jury that what they’re dealing with her isn’t self-defense; it’s murder.

The Young and the Restless spoilers say the judge will scold Christine after Michael’s objection. Christine will have no further questions, so it’ll be Michael’s turn. He’ll try to do damage control by suggesting there’s no evidence that J.T. is actually dead. After all, no corpse was found.

Michael will frame Phyllis as a vindictive woman who wanted to take down Victor Newman (Eric Braeden). He’ll even act like Victoria’s potential reunion with Billy Abbott (Jason Thompson) could’ve been a factor. Brittany will also act like Phyllis was out to get her rivals by throwing them behind bars.

Once Phyllis steps down, she’ll tell Jack Abbott (Peter Bergman) she didn’t know it’d play out like that. Jack will also speak with Billy about getting Phyllis off the Jabot throne. Kerry Johnson (Alice Hunter) won’t think they should take that step yet, but Jack will contend that Phyllis can’t be trusted.

At the coffeehouse, Summer will console a worried Phyllis. Y&R spoilers say Phyllis will fret about her twisted words and getting blamed if it all goes south. She’ll be glad to know Summer supports her no matter what.

Soon after, Summer will get a call from Dr. Nate Hastings (Brooks Darnell). He’ll explain that it looks like she could be a liver donor match for Lola Rosales (Sasha Calle). Nate will just need Summer to come back to the hospital and get a few more tests.