The Young and the Restless Spoilers: Summer’s Surgery Goes Horribly Wrong – Saves Lola with Liver Transplant, But Lands In A Coma? 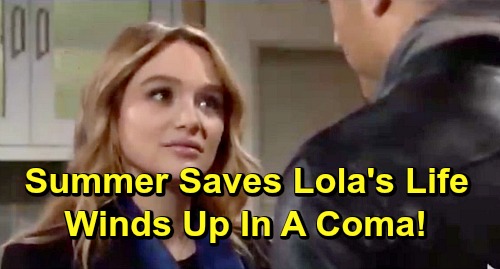 The Young and the Restless (Y&R) spoilers tease that Summer Newman (Hunter King) will hope for the best as she awaits her donor test results. Lola Rosales (Sasha Calle) needs a liver transplant, so Summer will be ready to pitch in if she can. This could certainly help Summer ease the tension with Kyle Abbott (Michael Mealor).

At first, it seemed like Summer just wanted what she couldn’t have. She only tried to get back together with Kyle after he became an item with Lola. Summer’s scheming side came out, which didn’t earn her any points with the man she’s pursuing. However, Summer’s recent love declaration appeared to be genuine. Perhaps it’s a simple case of not knowing what you’ve got until it’s gone.

Regardless, Summer cares about Kyle and doesn’t want him to suffer. She can see that the thought of losing Lola terrifies him. The Young and the Restless spoilers suggest Summer will likely be a match for Lola. A hint in Friday’s new Y&R episode, March 1, certainly points in that direction.

Summer asks Dr. Nate Hastings (Brooks Darnell) how dangerous this surgery is. She wants to know what the risks are if she’s a match and this transplant moves forward. On Monday, March 4, Nate will probably indicate that the procedure is relatively safe, but there’s always a risk when you go under the knife. He’s a straightforward doctor who tells it like it is, so it’s tough to imagine him sugarcoating it.

Of course, Summer would do just about anything to earn Kyle’s approval. She may insist that everything will be fine, but we’re willing to bet it won’t be! That danger comment could be a huge warning about the trouble ahead. Will Summer be the one left fighting for her life soon enough?

Let’s consider how this might play out. Summer could experience some complications during surgery. There’s a good chance things will go perfectly on Lola’s end, but Summer’s side of this could get downright scary. Nate may struggle to stabilize Summer after this procedure goes south. He would succeed eventually, but Summer could end up trading places with Lola and land in a coma.

Just imagine poor Kyle in the waiting room! He might learn Lola is going to make a full recovery, but Summer is now fading fast. Kyle might have to push Summer to wake up next. This could even make him realize his feelings for Summer run deeper than he thought.