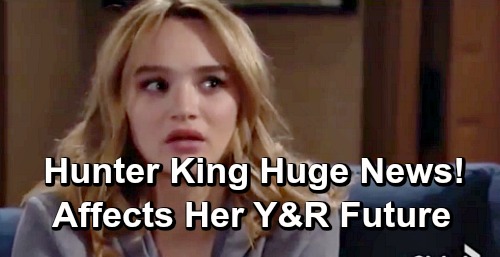 The Young and the Restless (Y&R) spoilers tease that we could be seeing less of Summer Newman (Hunter King) in the near future. When King heard Summer recast rumblings last year, she reached out to the show and offered to come back if they wanted her. Y&R took King up on the offer, but it came with a catch. They had to work around King’s role as a series regular on CBS’ Life in Pieces.

Of course, that presented some challenges – like when King was unavailable for Nick Newman (Joshua Morrow) and Sharon Newman’s (Sharon Case) botched wedding. Bayley Corman filled in as a Summer recast, but it was a shame we didn’t get the real deal for those scenes. No one can do troublemaker quite like King can, and it would’ve been nice to have a familiar face for a family event.

When King’s schedule got complicated again, The Young and the Restless wrote her out by sending her to take a job in Dubai. They ultimately brought her back on a mission to win Kyle Abbott’s (Michael Mealor) heart, but that may not be something Summer can pull off. All signs point to Kyle and Lola Rosales’ (Sasha Calle) future together, so where does that leave Summer?

It could leave Summer written out once more or simply pushed to the backburner. She may have to pine on the sidelines or make peace with what she can’t have and return to Dubai. Life in Pieces is returning for season four starting April 18, which King revealed on her Instagram account. It’s not clear how much of the season has already been shot, so there’s no word yet on how this will affect her Y&R role.

Regardless, The Young and the Restless may be backing Summer into a corner without imminent story or romantic opportunities. Once the latest legal battle is over for the Newmans, that might spark Summer’s next exit. Maybe she could even show some maturity on her way out. Summer’s been relentless in her pursuit of Kyle, so it’s time for her to grow up and back off.

However, Summer never truly changes – at least not permanently. She’ll probably just end up causing more drama down the road, so fans should stay on guard. There’s even a possibility Y&R will make something work and keep Summer on canvas. Whatever the case, it should be interesting to see what they have in store for the character.