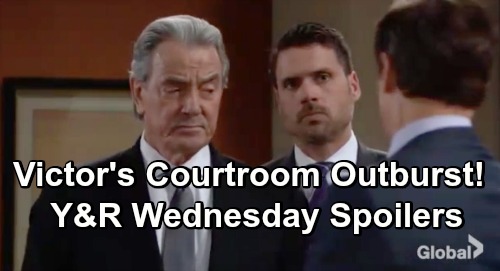 The Young and the Restless (Y&R) spoilers for Wednesday, February 27, tease that Sharon Newman (Sharon Case) will be on edge. Once she’s led into the court room, Sharon will note that her fate’s about to be decided. Brittany Hodges (Lauren Woodland) will do her best to soothe Sharon’s nerves. She’ll vow to do everything in her power to defend Sharon and get her out of this nightmare.

Sharon will worry about Mariah Copeland’s (Camryn Grimes) testimony as well. She’ll fret about what Christine Williams (Lauralee Bell) and Michael Baldwin (Christian LeBlanc) might ask, but Brittany will offer reassurance. She’ll think she can clean up any messes during cross-examination.

Michael will also inform Victoria Newman (Amelia Heinle) and Nikki Newman (Melody Thomas Scott) that they won’t be taking the stand. It’s just too risky since Christine would tear them apart. Over with Nick Newman (Joshua Morrow), he’ll rant to Summer Newman (Hunter King) about Phyllis Summers’ (Gina Tognoni) betrayal. Summer will push for a chance to change her dad’s mind.

After Summer defends Phyllis, Nick will get agitated and stand his ground. Summer will just want Nick to keep an open mind about Phyllis’ motives, but he won’t be on board with that plan. Afterward, Nick will talk to Sharon about Faith Newman (Alyvia Alyn Lind) while Billy Abbott (Jason Thompson) speaks with Brittany. She’ll note that Sharon doesn’t deserve to go down for the chaos that unfolded.

The Young and the Restless spoilers say Christine’s opening statement will be brutal. She’ll argue that Nikki’s attack was vicious and rant about the despicable cover-up. Victor Newman (Eric Braeden) will become enraged and pipe up about Christine misconstruing the facts. That’ll prompt the judge to scold Victor and settle everyone down in the courtroom.

Michael will think it’s best if Victor leaves, so “The Moustache” will indeed exit. Back with Christine, she’ll tell the jury that the Newmans don’t get a special pass when it comes to justice. Brittany will try to distance Sharon from the Newmans as a separate client. She’ll also point out that without a body, Phyllis’ testimony and that video don’t prove anything.

At Crimson Lights, Kyle Abbott (Michael Mealor) will support a nervous Mariah. She’ll fear she’s going to say the wrong thing in court and make matters worse for Sharon. Later, Kyle will get a call from Abby Newman (Melissa Ordway). He’ll realize he could use Mariah’s help with something a life-and-death situation.

Y&R spoilers say Kyle will fill Mariah in on Lola Rosales’ (Sasha Calle) liver donor needs. He’ll promise to take the blame if there’s any Rosales brother backlash. At the hospital, Mariah will do a GC Buzz segment highlighting Lola’s need for a donor. She’ll explain the dire circumstances with an emotional plea.

Fortunately, Arturo Rosales (Jason Canela) will soften thanks to Kyle’s efforts. He’ll allow Kyle to visit Lola, so that’s great news. Next, Kyle will learn the results of his donor match test are in. Dr. Nate Hastings (Brooks Darnell) will be ready to reveal them, so Kyle will hope he’s a candidate to save Lola.

Across town, Rey Rosales (Jordi Vilasuso) will agree to keep Mia Rosales’ (Noemi Gonzalez) secret for the baby’s sake. This is a disgusting crime on Rey’s part – he is breaking the law and protecting a violent criminal! He’ll question if Mia really wants this child or if it’s about staying out of prison – Rey clearly doesn’t deserve to be a law enforcement officer and belongs in prison himself.

Mia will assure Rey that this is their shot at being a happy family. She’ll gush about this pretend baby she’s cooked up and even get Rey excited eventually.

The Young and the Restless spoilers say Mia’s bound to hit some snags pretty soon, so stay tuned to watch her scheme fall apart – hopefully Rey’s coverup is discovered and he is at least fired. We’ll give you updates as other Y&R details emerge. Stick with the CBS soap and don’t forget to check CDL often for the latest Young and the Restless spoilers, updates, and news.