The Young and the Restless Spoilers: Mia Admits Pregnancy Lie – Comes Forward as Liver Donor to Save Lola’s Life

BY Kinsley Goldman on February 26, 2019 | Comments: one comment
Related : Soap Opera, Spoiler, Television, The Young and the Restless 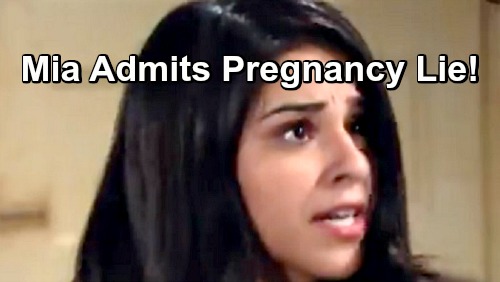 The Young and the Restless (Y&R) spoilers tease that Mia Rosales (Noemi Gonzalez) will face another challenge. In Tuesday’s Y&R episode, Mia manages to fake a positive pregnancy test, but that just buys her more time. Mia can’t think of anything else to do right now, so she’ll just have to hope she figures the rest out later.

Maybe Mia plans to bond with Rey Rosales (Jordi Vilasuso) over their pretend bun in the oven. She might think she can get Rey back on her side and eventually “lose” the baby. Mia may want to have a phony miscarriage and gain Rey’s sympathy. She could act like she’s grieving and connect with Rey in the process.

Then again, Mia would be willing to keep this charade going longer. Other soap women have used pregnancy pads and stolen babies to suit their needs. Mia’s a resourceful gal, so we wouldn’t put it past her. However, it’s doubtful this storyline will even get that far. In fact, it could be over much sooner than Mia expects.

The Young and the Restless spoilers say Lola Rosales (Sasha Calle) will eventually find a liver donor match. Who will it be? Kyle Abbott (Michael Mealor) and Summer Newman (Hunter King) are certainly options here, but what about Mia? This could be her ticket to avoiding prison and finding redemption.

On Tuesday, Mia tells Dr. Nate Hastings (Brooks Darnell) that she may not be able to donate part of liver. She blames “health issues” – meaning the pregnancy she’s trying to fake with Rey. Nate doesn’t test her as a result, which could be a clue that Mia will be tested later. Perhaps there’ll be no hope as person after person is eliminated. There may be no match in Lola’s circle of family and friends.

Will Mia secretly get tested just in case? What happens if Mia realizes she’s the only one who can save Lola’s life? She’d have to blow her pregnancy scheme if she comes clean. Mia would also risk going to prison for the attack on Abby Newman (Melissa Ordway).

Still, there are ways Mia could use this to her advantage. For starters, Mia could potentially make amends to Rey and Arturo Rosales (Jason Canela). They may not forgive Mia entirely, but they could at least back off the idea of turning her in.

Of course, The Young and the Restless spoilers say Mia could play hardball if she has to. She might suggest she won’t offer up part of her liver unless Rey agrees not to arrest her. That’d be risky since Rey could still turn on Mia later. Bottom line, saving Lola isn’t the perfect strategy to avoid punishment, but it could be the best one Mia’s got!

Do you think Mia will end up being the ideal donor match? Will she swoop in, save the day and make her problems disappear? We’ll give you updates as other Y&R news comes in. Stay tuned to the CBS soap and don’t forget to check CDL often for the latest Young and the Restless spoilers, updates, and news.