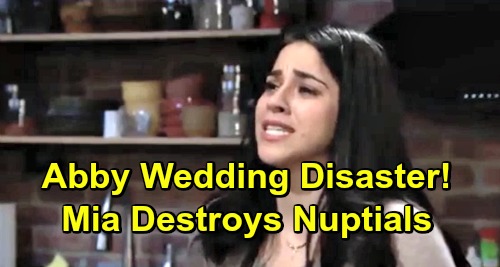 The Young and the Restless (Y&R) spoilers tease that a Jabot takeover is set to happen in the near future. Y&R fans can expect a serious loss for Phyllis Summers (Gina Tognoni) next week, so that could mean Jack Abbott (Peter Bergman) and Billy Abbott (Jason Thompson) will work quickly. If Kerry Johnson (Alice Hunter) provides the intel they need, this should be a piece of cake.

Since this takeover could happen lightning fast, that likely means there’ll be another reason for Ashley Abbott’s (Eileen Davidson) comeback. She’ll be returning for a two-day gig next month, so that’s something to look forward to. The Young and the Restless spoilers say Ashley will be in town again on March 28 and March 29.

Jack recently had a sweet moment with Abby Newman (Melissa Ordway). He pointed out that he didn’t see Ashley coming home anytime soon, so he could help with wedding planning. Obviously, Jack’s wrong about Ashley staying in Paris. How she could she miss her own daughter’s wedding?! Ashley wouldn’t do that, so we’re betting that’s why Ash will pop back in Genoa City briefly.

Traci Abbott (Beth Maitland) will also be on hand for some special episodes. It makes sense that the Abbotts will all gather to support Abby on her big day. Unfortunately, this may not be the dream wedding Abby anticipates. Let’s face it: Abby and Arturo don’t have some epic love story. What would be the point of this marriage? Instead, we’re betting Y&R will use the nuptials for major drama.

We should also remember that there have been changes behind the scenes. The Young and the Restless is bringing some new characters in and likely cutting others. Mia Rosales’ (Noemi Gonazlez) exit story is potentially underway. Could Arturo be next? It’s possible a shocking secret will blow up and derail the wedding. Abby may call the whole thing off once she hears the startling truth.

Let’s say Arturo finds out Mia attacked Lola Rosales (Sasha Calle) and keeps quiet about it. There are several reasons he might. One is Mia’s grand show of remorse recently. Another is that fake baby she’s carrying. One more is the possibility that she’ll ditch that fake baby and save Lola’s life.

If Mia is a donor match, she could be the one to give Lola part of her liver. In the end, Arturo may take pity on Mia and let it all go. Things are good between Abby and Mia now, so Arturo may not want to rock the boat.

Mia’s willing to back off, Lola will recover and they can all be one big happy family, right? Wrong! How will Abby feel when she realizes Mia targeted her and got Lola by mistake? She’ll be furious that Mia would go after her like that. Abby should be equally furious that her sorrow over Lola’s suffering was exploited.

There’s also Arturo’s potential silence. That could be what sends Abby over the edge and convinces her this marriage can’t work. She may feel like Arturo’s always going to side with his ex. If there’s a cheating scandal that can blow up, that’s even better. A lot can happen between now and the end of March – even if it’s a rewrite or something that occurred offscreen.

Regardless, The Young and the Restless spoilers state that a wedding disaster could be brewing. Abby may learn something horrifying that leaves her unwilling to say “I do.” We’ll give you updates as other Y&R news comes in. Stick with the CBS soap and don’t forget to check CDL often for the latest Young and the Restless spoilers, updates, and news.