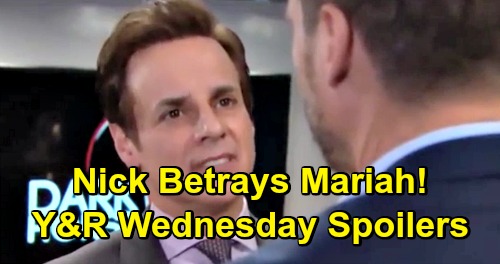 The Young and the Restless (Y&R) spoilers for Wednesday, February 27, tease that court prep will be in full swing. Michael Baldwin (Christian LeBlanc) will be armed with new information, so he’ll be ready to take on Christine Williams (Lauralee Bell). Victoria Newman (Amelia Heinle) and Nikki Newman (Melody Thomas Scott) will certainly need all the help they can get.

Tuesday’s Y&R episode brings Michael up to speed on the incriminating video, which was found on the Dark Horse servers. He also has an idea of how to use the blackmail scheme to Nikki and Victoria’s advantage. Of course, it’s a risky strategy since the payment could be viewed as an admission of guilt. However, Michael will remain confident that he can frame it as further victimization of the women.

Despite assuring Mariah Copeland (Camryn Grimes) and Tessa Porter (Cait Fairbanks) that he wouldn’t expose Tessa as the blackmailer, it looks like Nick Newman (Joshua Morrow) will be on board with Michael’s plan. It’ll mean betraying Mariah, but Nick’s priority right now is getting Nikki and Victoria off the hook for murder. On Wednesday, Nick won’t mind throwing Tessa under the bus for their sake.

Of course, no one is telling anybody else the whole story here. For Crystal Porter’s (Morgan Obenreder) safety, Tessa can’t come clean about why she needed the money. That’s too bad since Crystal saved Abby Newman’s (Melissa Ordway) life! The kidnapping fiasco may also stay buried since Tessa wouldn’t want to incriminate Sharon Newman (Sharon Case) in any way.

In other words, Y&R could be eliminating any sympathetic angle and that spells deep trouble for Tessa. The Young and the Restless spoilers say Mariah will be on edge in Wednesday’s episode. If Tessa’s taught her one thing, it’s to be wary about trusting people. Mariah got burned by the cover-up crew when they plotted behind her back, so she may worry Nick will do the same.

Whatever the case, Mariah will end up making some bold moves on Wednesday’s new Y&R episode, February 27. She may take steps to protect Tessa, which might be possible if she can make sure there’s no trail to follow. Mariah could also seek out an ally for help. She could even bring up the kidnapping incident to Nick with a warning about everything coming out. Mariah might just hope Nick wouldn’t call her bluff on that.

Regardless, it’s clear that everyone in this is willing to play dirty. All’s fair in love and war! Unfortunately, things aren’t feeling so fair for poor Kyle Abbott (Michael Mealor). He’ll continue to be shut out at the hospital, so he’ll feel powerless. Kyle will just wish there was more he could do for Lola Rosales (Sasha Calle).

The Young and the Restless spoilers say Kyle will get some troubling news within the next couple episodes, so that undoubtedly involves Lola’s liver failure. Can Kyle find a donor match to save Lola’s life? We’ll give you updates as other Y&R details emerge. Stick with the CBS soap and don’t forget to check CDL often for the latest Young and the Restless spoilers, updates, and news.