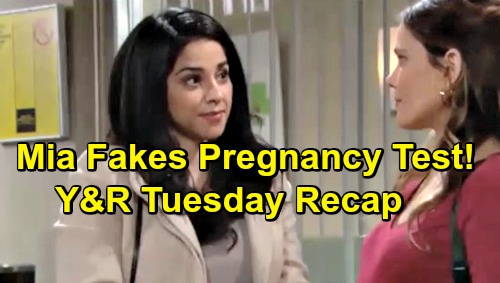 The Young and the Restless (Y&R) spoilers for Tuesday, February 26, tease that Mia Rosales (Noemi Gonzalez) will stand by her baby claims. She’ll tell Rey Rosales (Jordi Vilasuso) that this child will change everything and argue that he can’t make an arrest. When Rey asks to see the positive pregnancy test, Mia will suggest she threw it out. Rey will naturally want to see another one for proof of this kid.

Mia will sob about how the baby shouldn’t pay for her mistakes. Soon after, she’ll head to the hospital with Rey. Dr. Nate Hastings (Brooks Darnell) will tell Rey and Arturo Rosales (Jason Canela) that their sister’s liver troubles have gotten worse. Lola Rosales (Sasha Calle) will need a liver transplant, but she can use a living donor. Arturo and Rey will agree to be tested in case they’re a match.

Rey will let Mia know a pregnancy test is happening immediately after. That’ll give her time to work a little baby magic. Mia will run into a pregnant woman in the waiting room, so she’ll get an idea and offer a chance to make money. Back with Arturo and Rey, they’ll learn they weren’t matches for Lola. Nate will insist they need to ask everybody they know to get tested and hopefully find someone who can save Lola’s life.

Later, Mia will give Rey a shock by handing over a positive pregnancy test. She’ll insist her hubby has a big decision to make. Across town, Phyllis Summers (Gina Tognoni) will explain the whole J.T. Hellstrom (Thad Luckinbill) cover-up to Summer Newman (Hunter King). Summer will understand why Phyllis snitched and promise she has her mom’s back.

At Victoria Newman’s (Amelia Heinle) house, a strategy meeting will get underway. Billy Abbott (Jason Thompson) will want Victoria to have her say in court, but Michael Baldwin (Christian LeBlanc) will want to keep Victoria off the witness stand. The same goes for Nikki Newman (Melody Thomas Scott). Michael will argue that Christine Williams (Lauralee Bell) will rip them to shreds over all the lies.

Billy will think keeping their mouths shut will only make them look guilty. He’ll try to persuade Michael, but Nick Newman (Joshua Morrow) will suggest that Michael’s right. It’d be better to put Phyllis on the stand and destroy her instead. Talk will turn to the warrant for the Dark Horse servers. Michael will want to know what’s on it so he can prepare for everything to come out in court.

At the coffeehouse, Mariah Copeland (Camryn Grimes) will ask Tessa Porter (Cait Fairbanks) for a difficult favor. Once Tessa’s on board, Mariah will schedule a meeting with Nick. The Young and the Restless spoilers say Mariah and Tessa will head over to Dark Horse. They’ll want to make their pitch with Nick and hope he’ll leave Tessa out of this.

Nick will admit he was already in the loop on the blackmail. He’ll express concern about Mariah staying with Tessa, but he’ll insist he’s not going to the cops. Since the ladies paid Tessa, that could be viewed as an admission of guilt. Unfortunately, Michael will have a different view when he hears about the video and blackmail. He’ll contend that it would help paint Nikki and Victoria as victims.

At the Abbott mansion, Billy will push Jack Abbott (Peter Bergman) to help him. He’ll note that Kyle’s in, but he can’t do this without Jack’s support, too. Billy will want to take back control of Jabot and protect their family’s legacy. He’ll think they should use Kerry Johnson (Alice Hunter) to get information.

Jack will mull it over for a moment and decide the plan will move forward. He’ll want to put Jabot back into rightful Abbott hands. Elsewhere, Phyllis will want to make sure Kerry’s in her corner. Y&R spoilers say Kerry will provide reassurance. She won’t think a change in leadership is what Jabot needs right now, so she’ll do whatever it takes to assist Phyllis.