The Young and the Restless Spoilers: Phyllis Betrayed by Kerry, Jack’s Scores Big – Traitor Gets Taste of Her Own Medicine 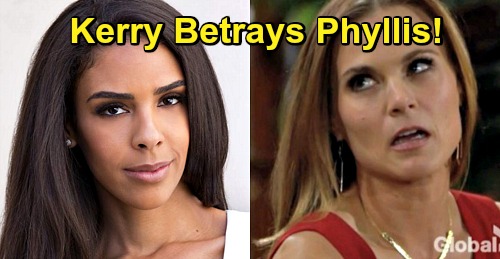 The Young and the Restless (Y&R) spoilers tease that Billy Abbott (Jason Thompson) will feel like Phyllis Summers (Gina Tognoni) has gone too far. He’ll seethe over the way Phyllis sold out her fellow cover-up crew members for an immunity deal. Billy won’t think it’s fair for Victoria Newman (Amelia Heinle) and the others to suffer while Phyllis runs Jabot as usual.

In fact, Billy will think this is the perfect opportunity to stage a coup with Jack Abbott (Jason Thompson). Once Jack gets on board, they’ll consider how they’re going to pull this off. Phyllis is obviously a smart cookie. She was certainly smart enough to save herself and hang the rest of the girls’ night gang out to dry!

However, what goes around comes around. The Young and the Restless spoilers say Phyllis will face some betrayals soon as well. We’re not just talking about Jack and Billy either. There could be one other person in on the plot to take Phyllis down – and it’s someone Phyllis trusts. It’s even someone Phyllis would probably consider her friend.

Kerry Johnson (Alice Hunter) has proven to be a real asset for the team at Jabot. Y&R fans will recall that she joined the staff at a pivotal time for the company. Ashley Abbott (Eileen Davidson) walked away with Jabot’s most popular patents, so they had to start from scratch in some ways. Kerry really stepped up when Phyllis needed her to.

There have even been moments when Phyllis opened up to Kerry about personal matters. She’s put her faith in Kerry, but will that turn out to be a mistake? The Young and the Restless spoilers say Billy will suggest bringing Kerry into this takeover plan. He’ll pitch the idea to Jack and hope his brother can convince Kerry.

Of course, Billy will have to convince Jack first! You can bet Jack won’t want to put Kerry in such a tricky situation. Nevertheless, Jack will have to think about his family’s legacy. Phyllis has put herself right in the middle of a huge scandal. That can’t be good for business or Jabot’s future.

Perhaps that’ll be enough to make Jack go for it. He may explain the takeover strategy to Kerry and ask if she’ll help. Jack and Billy will want inside info that could aid them as they plot against Phyllis. Will Kerry be willing to scheme, too? The Young and the Restless spoilers say Phyllis will face a massive loss during the week of March 4-8. That could mean Kerry will help make this takeover happen.

Since Phyllis is the ultimate betrayer, it should be nice to see her face a little karma here! We’ll give you updates as other Y&R news comes in. Stay tuned to the CBS soap and don’t forget to check CDL often for the latest Young and the Restless spoilers, updates, and news.