The Young and the Restless Spoilers: Paul Williams Tracking J.T. Hellstrom – Returns To GC For Surprise Ending To Murder Case 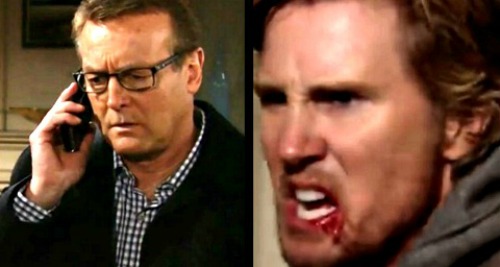 The Young and the Restless spoilers tease that Doug Davidson’s (Paul Williams) social media announced of his character’s return date, March 25, should be linked to the end of the J.T. Hellstrom (Thad Luckinbill) case. It appears as though Chief Williams will return and help to wrap this extended storyline that has enveloped Genoa City for nearly a year.

Y&R posts a photo of Luckinbill, apparently, in-character, holding a cup of coffee at Crimson Lights. Included in the tweet was an advisory to “Stay tuned!”. Well, that was certainly purposeful and ominous.

Eric Braeden’s (Victor) joyful announcement about his colleague and friend’s return to the set was then followed by Davidson noting he would be seen on screen late next month. No longer rumor, the facts about Luckinbill and Davidson, along with the current pacing of the J.T. storyline indicate that hope that a March wrap of the J.T. dies (or did he?) arc is coming to an end.

Will J.T. be revealed as alive since he was hit on the back of his head by Nikki (Melody Thomas Scott) on April 13, 2018? The Young and the Restless buzz says that Paul has been working undercover to track down J.T. who is in fact alive.

That would seem impossible because if that blow alone didn’t kill Mr. Hellstrom, being buried under six rectangular feet of dirt for any amount of type surely would have – but this is a soap and we don’t know for how long J.T. was buried nor how deep.

Where has Paul been since he oddly was written away from the now reconfigured police station setting. Savvy viewers have been wondering if the new visual angles where Rey (Jordi Vilasuso) and Sharon (Sharon Case) have been recently shown were a veiled wink to the fans about Davidson’s eventual return.

Y&R’s devoted viewers have known all along that Davidson’s continuous presence on the show’s online cast list has indicated that he was not gone. While the actor himself was honestly unsure about when he would return and apparently hired new agency representation, he never said that he’d received official notice that he was removed from the cast. Instead, he wasn’t scheduled to work and had no indication of when Paul would be back. Well, that return date is now known.

Rey and Christine (Lauralee Bell), Paul’s wife and GC’s District Attorney, have been making progress with the lingering J.T. case. While daytime devotees are understandably impatient, it must be said that real life legal mysteries aren’t all solved within a few months, as some stretch for as long as this tale has, others longer, and some go forever unresolved.

Y&R surely posted Luckinbill’s photo as a teaser toward the coming conclusion. It’s follow with Davidson’s announced return date creates optimism that this complex storyline will not just end, but do so in a way that satisfies the fans. CDL is a leading source for everything linked to The Young and the Restless. Check back regularly for Y&R spoilers and news!