The Young and the Restless Spoilers: Beth Maitland Announces Traci’s Return to GC – Abbotts Meet To Throw Phyllis Out 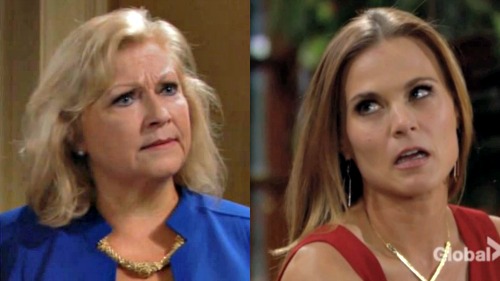 The Young and the Restless spoilers has some great news to pass on about a popular Y&R star. Beth Maitland, who portrays Traci Abbott on the CBS soap, will be back on our screens soon.

Beth recently posted an update on her Instagram feed about her impending return to Y&R. She posted a photo of her shoes along with the following caption: “Packing a bag and donning my Docs and heading to Genoa City for an early call tomorrow #actorslife #letdothis #yr #grateful.”

The last time we saw Traci Abbott was at the disastrous memorial service for J.T. Hellstrom (Thad Luckinbill) in January. The service was meant to be an opportunity for closure for Reed Hellstrom (Tristan Lake Leabu) but turned into a nightmare when Phyllis Summers (Gina Tognoni) decided to reveal that J.T. had abused Victoria Newman (Amelia Heinle).

So what will Traci be up to this time around in GC? We suspect that it will have something to do with Jabot drama. Now that Jabot CEO Phyllis is embroiled in the J.T. murder trial as the star witness for the prosecution, Jack Abbott (Peter Bergman) and Billy Abbott (Jason Thompson) are going to work to oust Phyllis.

Jack and Billy won’t think that Phyllis being involved in J.T.’s murder coverup will look particularly good for Jabot, and they’ll be enlisting the help of others to reclaim control of the company. They’ll try to get Kerry Washington (Alice Hunter) on board to oust Phyllis, and they’ll probably turn to Traci as well.

Of course, when Traci’s around, she typically tries to bring her family together, so she’ll probably work to keep the peace as the Abbotts scramble to figure out who would should step in as the next CEO of Jabot.

Are you looking forward to seeing Traci back in Genoa City? Stay tuned to the CBS soap and don’t forget to check CDL often for the latest Young and the Restless spoilers, updates, and news.

Parking a bag and donning my Docs and heading to Genoa City for an early call tomorrow. #actorslife #letdothis #yr #grateful