BY Marcy Cohen on February 23, 2019 | Comments: one comment
Related : Comings & Goings, Soap Opera, Spoiler, Television, The Young and the Restless 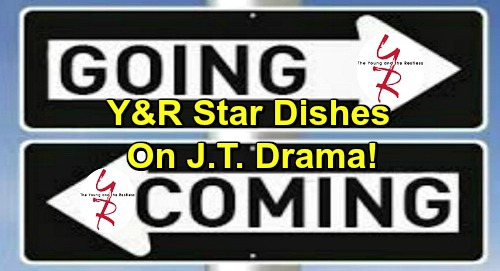 The Young and the Restless (Y&R) spoilers tease that some big returns are brewing in our comings and goings news. For starters, Y&R fans are still excited about Paul Williams’ (Doug Davidson) comeback. After Davidson tweeted about seemingly being let go from the show, plenty of viewers and costars spoke up to support him.

That support paid off since Davidson is headed back to fight crime in Genoa City. He recently took to Twitter again, but he had something much better to share this time around. Davidson revealed his next airdate, so that lets us know when to expect Paul on screen. The Young and the Restless spoilers say Paul will return starting March 25, so be sure to tune in!

Y&R’s Twitter account also hinted at J.T. Hellstrom’s (Thad Luckinbill) possible back-from-the-dead storyline. They posted a photo of Luckinbill, who was on set again recently. It looks like he returned to film some good stuff, so it should be interesting to see what the show has in store.

Let’s hope J.T.’s latest arc can get the Nikki Newman (Melody Thomas Scott), Victoria Newman (Amelia Heinle) and Sharon Newman (Sharon Case) off the hook. Their attorneys certainly have their work cut out for them right now. Michael Baldwin (Christian LeBlanc) will fight for Victoria and Nikki’s freedom, but it’ll be up to Brittany Hodges (Lauren Woodland) to save Sharon.

Many Young and the Restless viewers are glad to see Brittany get back in the action. Woodland is thrilled to be part of this legal drama as well. In an interview with Soap Opera Digest, Woodland talked about how her other job influences her work on the CBS soap. Some fans may not realize that Woodland is actually a real-life attorney.

“Being a lawyer is second nature to me now, so I can really enjoy performing the scenes without having to worry if I’m playing a lawyer accurately,” Woodland said. However, Woodland did have to do some schedule juggling to make this happen. She naturally had to make sure her actual clients came first!

Fortunately, it all worked out and now Woodland’s having a blast. She also talked about Brittany’s history with J.T. and how her character must leave her emotions out of it. Woodland said Brittany “has to put her personal feelings aside and move forward 100-percent committed to representing her client, and put on the best possible case for Sharon.” It’s great that Sharon has Brittany in her corner.

That’s it for comings and goings. We’ll give you updates as other details emerge. Stick with the CBS soap and don’t forget to check CDL often for the latest Young and the Restless spoilers, updates and news.