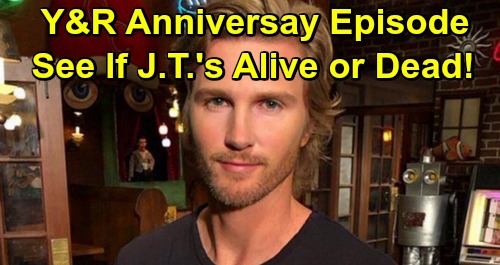 The Young and the Restless (Y&R) spoilers tease that a significant day is rapidly approaching. February will be over soon, so let’s turn our attention to March. It’s sure to be a busy month for the cover-up crew members going on trial. There’ll be loads of Newman chaos to keep the story going strong.

We also know Thad Luckinbill (J.T. Hellstrom) was recently spotted on set. Y&R released a picture of Luckinbill and encouraged fans to “stay tuned.” J.T. will clearly be back on screen in some capacity. It seems odd for The Young and the Restless to spill such huge news instead of preserving the surprise, but perhaps they knew the secret would get out anyway. They might as well get ahead of it.

Then again, plenty of people already suspected J.T. would be back. Maybe the show decided they should just confirm it and let viewers’ excitement grow. Regardless, J.T.’s returning for more drama. With that in mind, let’s consider what Y&R has in store for us.

It’s possible J.T. will pop back up for a nightmare or fantasy. However, that’d be a waste. All the signs point to J.T. being alive. Since they went to the trouble of bringing Luckinbill back, it makes sense that it’ll be for more than just something minor.

The timing could be another big clue about J.T.’s survival. We mentioned that March would be chaotic, so it looks like this story will still be in progress by April. That’d be an excellent time to wrap things up with J.T.’s return arc. A very important date is looming, and we’re betting they’re going to acknowledge it with a twist.

The Young and the Restless fans will recall that J.T. died – or “died” as the case may be – on the night of April 13. That falls on a Saturday this year, but the Friday before would do just fine. After all, the party kicked off on April 12, so it was technically the same day in soap time.

That’ll mark one whole year since this storyline kicked off. Obviously, that’s a massive deal. Y&R will surely do something special for that cliffhanger Friday. They’d be fools if they didn’t! Patient fans have watched an entire year’s worth of the J.T. saga, so they’ll need a big reveal for the payoff.

There are a few options Y&R could go with. It’s possible J.T. will be seen by fans beforehand and revealed to the characters on April 12. J.T. might confront Victor Newman (Eric Braeden) that day or perhaps meet with a secret partner in crime like Phyllis Summers (Gina Tognoni).

On the other hand, they could show fake flashbacks of what really happened after the ladies left Chancellor Park. Maybe we’ll see J.T. rising from the grave with a little help from someone surprising. We might even see how J.T. tormented the cover-up crew and framed Victor along the way.

Bottom line, April 12 should bring a can’t-miss episode. Since the calendar didn’t cooperate for a revelation on April 13, we’ll get to celebrate the one-year anniversary of this story a day early. The Young and the Restless spoilers say the drama will heat up, so stay tuned.

Are you looking forward to J.T.’s comeback and the mayhem that will unfold? Do you think Y&R will deliver a shocker for the one-year anniversary of J.T’s death? We’ll give you updates as other details emerge. Stick with the CBS soap and don’t forget to check CDL often for the latest Young and the Restless spoilers, updates, and news.