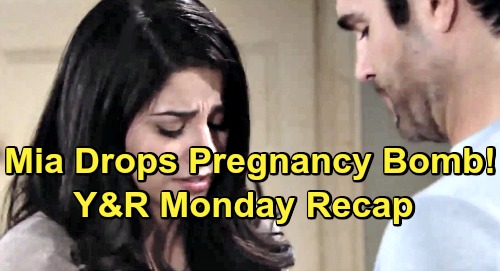 The Young and the Restless (Y&R) spoilers for Monday, February 25, tease that a Jabot crisis meeting will be called. Of course, Phyllis Summers (Gina Tognoni) will argue that there’s no crisis at all. She’ll downplay her role in the J.T. Hellstrom (Thad Luckinbill) mayhem and insist on running the company as usual.

Lauren Baldwin (Tracey E. Bregman) will worry that Phyllis can’t handle this like she thinks she can. Billy Abbott (Jason Thompson) will also point out that Phyllis is in this deep. She’s considered a witness, but we all know she was a willing participant. Billy will gripe about Phyllis selling out the others for her immunity deal, but Phyllis will stand by her claim of trying to help them.

At the Abbott mansion, Abby Newman (Melissa Ordway) and Jack Abbott (Peter Bergman) will catch up. The restaurant is currently on hold due to Lola Rosales’ (Sasha Calle) hospitalization, so Abby will fill Jack in. Talk will eventually turn to Abby’s wedding plans. Jack will want to pitch in since he doesn’t think Ashley Abbott (Eileen Davidson) will be back in Genoa City anytime soon.

At the hospital, Mia Rosales (Noemi Gonzalez) will tearfully explain the mix-up to an unconscious Lola. She’ll admit she thought Lola was Abby and fret about the mess she’s caused. Mia will assure Lola of her love and suggest she’ll never forgive herself if Lola doesn’t wake up.

Arturo Rosales (Jason Canela) will catch the last part of Mia’s confession and grow suspicious. He’ll wonder why it sounds like Mia knows more than she’s letting on. Y&R spoilers say Mia will cover her blunder. She’ll indicate that she feels guilty for bringing so much pain to the Rosales family. Mia will insist she wants Lola’s forgiveness, so Abby and Arturo will offer comfort.

At the police station, Rey Rosales (Jordi Vilasuso) will learn that Lola’s attacker seems to be female. He’ll mull over Lola’s case file at home until an idea suddenly hits. After Rey whips out Mia’s jewelry box and looks inside, he’ll find the other earring and become enraged.

Once Mia returns, Rey will confront her with the evidence. The Young and the Restless spoilers say Mia will burst into tears and come clean about what happened. She’ll beg for Rey’s help, but he’ll start putting handcuffs on Mia and reading her rights. That’s when Mia will drop a baby bomb! She’ll insist that Rey can’t do this because she’s pregnant.

Back at the hospital, Kyle Abbott (Michael Mealor) will ignore Abby’s advice and visit Lola. He’ll put on a lab coat as a disguise and gain entrance to Lola’s room. The Young and the Restless spoilers say Kyle will make a passionate speech about how much he adores Lola. He’ll suggest that what he wanted most wasn’t sex; he just loved the idea of waking up next to the woman he loves.

After Arturo bursts in, he’ll fly off the handle and start a fight. Kyle will think Arturo needs to see another side of all this. If Abby was in that bed, Arturo would hate not being able to see her. Arturo will fire back that he wouldn’t betray Abby like Kyle betrayed Lola. He’ll insist that Kyle needs to scram.

Over with Nick Newman (Joshua Morrow), he’ll have a storm waiting for Phyllis when she gets home. Nick will seethe about Phyllis not keeping her mouth shut. He’ll wonder how she possibly thought he’d be OK with this. Nick will snarl at Phyllis to get out of his house and out of his life, so “Phick” will be officially done.