The Young and the Restless Spoilers: Nick Done with Phyllis the Traitor – Kicks Rat Out of His House and Out of His Life 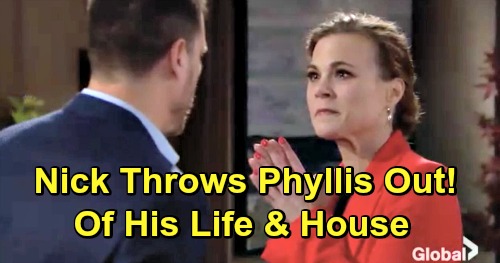 The Young and the Restless (Y&R) spoilers tease that Nick Newman (Joshua Morrow) will be pushed to his limit. Phyllis Summers (Gina Tognoni) cut a deal to secure her freedom, but it’ll cost her big time – both personally and professionally. While a Jabot takeover brews, Phyllis will have to face Nick’s fury. He’ll be appalled with his live-in girlfriend for betraying the rest of the girls’ night gang.

Nick was committed to helping these women keep their pact intact. Even after the arrests, Nick thought they could get out of this mess. Sharon Newman (Sharon Case) recanted her confession and all parties involved have top-notch lawyers. Without J.T. Hellstrom’s (Thad Luckinbill) body, the charges might not have stuck. The cops wouldn’t have scored physical evidence if Phyllis hadn’t piped up.

Now Christine Williams (Lauralee Bell) has the proof she needs and a star witness to boot. Nick will argue that Phyllis handed the DA a victory on a silver platter. He won’t understand how Phyllis could be so selfish. How could she just sell out Sharon, Nikki Newman (Melody Thomas Scott) and Victoria Newman (Amelia Heinle) like that?

Of course, Phyllis will suggest that she did them all a favor. She’ll contend that the truth was coming out anyway, so it was best to tell Christine everything. Phyllis will think the ladies have a better shot of getting cleared now that she’s declared them innocent victims.

Y&R spoilers say Nick won’t be interested in Phyllis’ excuses – not when she’s standing there in front of him and three other women he loves are locked up! He’ll believe Phyllis was only looking out for number one – and he’s 100% correct. Nick knew Phyllis could be ruthless, but he never thought she’d take down his family like this. He’ll insist that Phyllis crossed the line and there’s no coming back from it.

The Young and the Restless spoilers say Nick will tell Phyllis to get out of his house and out of his life. He’ll insist that they’re done as Phyllis cries. She’ll be heartbroken, but probably not heartbroken enough to regret the deal she made. It’s doubtful Phyllis would change her mind if she could undo the damage. Nick’s just not worth it!