The Young and the Restless Spoilers: Friday, February 22 Recap – No Bail for The Newmans – Rey Discovers Abby’s Parka 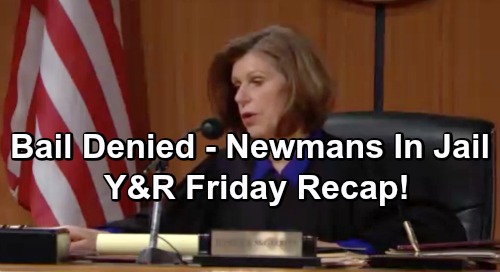 The Young and the Restless (Y&R) spoilers update and recap for Friday, February 22, tease that Michael Baldwin (Christian LeBlanc) will offer a warning to his clients. He’ll tell Nikki Newman (Melody Thomas Scott) and Victoria Newman (Amelia Heinle) their stories are muddled and riddled with holes. Michael will want them to get their act together and stick to one version of what happened.

Meanwhile, Nick Newman (Joshua Morrow) will be frustrated when Phyllis Summers (Gina Tognoni) suggests she’s not going to the courthouse. He’ll think she should show her support, but Phyllis will make excuses. Once Nick persuades her, Phyllis will contact Christine and let her know she’s going to be there.

Back at in the courtroom, everyone will file in and take their seats – including Phyllis. Christine will assure the judge that she’s got physical evidence. She’ll also mention her star witness is Phyllis, which will leave Nick fuming. During a brief recess, Nick will voice his complaints. However, Phyllis will insist that her story put the other ladies in the best possible light.

Victor Newman (Eric Braeden) will warn Phyllis that if Nikki and Victoria go down because of her, there’s going to be trouble. Nearby, Sharon will try to calm a livid Mariah. She’ll contend that the truth was going to come out anyway, but Mariah will still be upset about the backstabber.

Over with Michael, he’ll corner Christine and insist that Phyllis isn’t reliable witness. He’ll feel like Phyllis deserved charges as well, but that immunity deal took care of that little matter. Once court’s back in session, Nikki will plead not guilty to intentional second-degree homicide and obstruction of justice.

Victoria and Sharon are next, so they’ll also enter not guilty pleas. After Christine argues that they’re all flight risks, the judge will deny bail. At the police station, Rey Rosales (Jordi Vilasuso) will see the parka Lola Rosales (Sasha Calle) was wearing at the time of her attack. He’ll realize that’s not his sister’s coat.

At Jabot, Summer Newman (Hunter King) will confront Kyle Abbott (Michael Mealor) about planting ideas in Rey’s head. She’ll think Kyle pointed the finger at her, but he’ll argue that he simply answered the detective’s questions. Kyle will note that he’s being treated like a suspect, too. He’ll get emotional as he talks about Lola, but Summer won’t know why he’s stuck on a girl who keeps rejecting him.

Summer will blurt out that she loves Kyle and that’s not going to change. Kyle will think Summer’s confusing love with attraction, but she’ll stand her ground on the matter. At the hospital, Mia Rosales (Noemi Gonzalez) will remain a mess over Lola’s ordeal. Near Lola’s bedside, Mia will wish that she could turn back time and undo this.

Afterward, Abby Newman (Melissa Ordway) will try to convince Arturo Rosales (Jason Canela) to let Kyle see Lola. Naturally, he’ll shut down that plan. Arturo will contend that Kyle will only be allowed in if Lola awakens and asks for him herself. Abby will share a tender moment with Mia next. They’ll both regret their fight at the GCAC and wish they could do over that night.

Other Young and the Restless spoilers say Rey will grill Mia at home. He’ll want to know more about Mia and Abby’s faceoff. Mia will quickly shift gears and focus on Lola’s attacker. She’ll try to throw Rey off the trail by suggesting someone may have targeted Lola because of him. People sometimes hold grudges against cops.