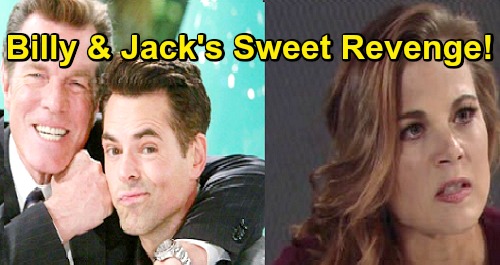 The Young and the Restless (Y&R) spoilers tease that Billy Abbott (Jason Thompson) will be appalled with his ex. Phyllis Summers (Gina Tognoni) always manages to get on his bad side anyway, but this time she’ll really go too far. Billy will be furious with Phyllis after her testimony takes down Victoria Newman (Amelia Heinle). That’s the mother of his children and someone he cares for a great deal.

Billy wants to reunite with Victoria, but Phyllis’ move will hinder the progress he was making. If Victoria’s behind bars, it’s a little hard to revive a love story! Billy considers Sharon Newman (Sharon Case) a friend, so he won’t be happy that she’s getting burned either.

Nikki Newman (Melody Thomas Scott) is also Grandma to Johnny Abbott (Holden and Ryan Hare) and Katie Abbott (Sienna Mercuri). That’ll be another reason for Billy’s anger to rev up. Naturally, Jack Abbott (Peter Bergman) will see Phyllis’ true colors as well. He tends to cut Phyllis too much slack, but he won’t after she seals Nikki’s fate. Nikki certainly means a lot to Jack, so he’ll want revenge for her sake.

Once Jack and Billy hear all the facts, they’ll trust Phyllis’ version of events. They’ll know the cover-up crew wouldn’t have ganged up on J.T. Hellstrom (Thad Luckinbill) and murdered him in cold blood. However, that’ll just make them even more enraged over Phyllis’ betrayal. She’s selling out the rest of them to save herself, so she deserves a good dose of payback.

Phyllis will get that in more ways than one, but let’s focus on her targeted career for now. The Young and the Restless spoilers say a sneaky plan is brewing. Jack and Billy tend to have a complicated relationship, but they’ve gotten back on track lately. That’s nice since it’ll make their upcoming partnership easier.

Y&R fans can expect Billy and Jack to team up on a takeover plot. This is their chance to regain control of Jabot and put an Abbott back on the throne. They may not even care which one as long as they wrestle the CEO spot away from Phyllis. It shouldn’t be too hard since she’s caught up such a huge scandal. Phyllis’ immunity deal helped her avoid charges, but she won’t be able to escape the backlash.

The Young and the Restless spoilers say Phyllis will be blindsided by the Abbott brothers’ efforts. Will Jack and Billy pull off their goal and leave Phyllis reeling? Will she lose the top spot at the company and have to move on? We’ll give you updates as other Y&R news comes in. Stay tuned to the CBS soap and don’t forget to check CDL often for the latest Young and the Restless spoilers, updates, and news.