BY Heather Hughes on February 21, 2019 | Comments: one comment
Related : Soap Opera, Spoiler, Television, The Young and the Restless 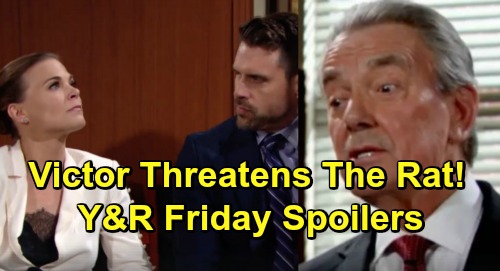 The Young and the Restless (Y&R) spoilers for Friday, February 22, tease that we’ll see some courtroom shockers. Mariah Copeland (Camryn Grimes) spends most of Thursday’s episode trying to figure out why Phyllis Summers (Gina Tognoni) walked free. Nick Newman (Joshua Morrow) suggests Phyllis couldn’t figure it out either, but Y&R fans know Phyllis is deceiving him.

As a result, Nick is going to be horrified at Friday’s arraignment. Sharon Newman (Sharon Case), Victoria Newman (Amelia Heinle) and Nikki Newman (Melody Thomas Scott) are all going down thanks to Phyllis. Of course, Sharon’s initial confession didn’t do them any favors, but they might’ve been able to wiggle out of it since she recanted. Unfortunately, Phyllis sold them all out with stunning evidence.

The Young and the Restless spoilers say Phyllis will indeed be the DA’s star witness – just like Christine Williams (Lauralee Bell) insisted she would. Phyllis will have no problem sharing everything she knows to save herself. Before she takes the stand to do that, Phyllis will get a warning from Victor Newman (Eric Braeden). He’ll want to make it clear that there had better not be any surprises.

Victor will insist that if Phyllis doesn’t do whatever she can to protect Nikki and Victoria, she’ll pay the price – this is a veiled death threat from The Moustache. Anyone responsible for getting Nikki and Victoria a long prison sentence would be in great danger as long as Victor was around.

The threat may rattle Phyllis a bit, but she won’t show it. Instead, Phyllis will calmly begin her testimony and rat out the others as planned. There’s no way she’s throwing away her immunity deal for the Newmans or anybody else – even Nick.

The Young and the Restless spoilers state that Nick will be crushed over this betrayal. The ladies made a pact to keep what happened that night a secret. Phyllis is the one who pushed for the cover-up in the first place, but now she’s leaving them all in a hopeless situation.

Nick will realize Phyllis is the reason his mom, sister and the mother of his children are all going to suffer. Of course, Phyllis will argue that she just got caught up in Nikki and Victoria’s mess. She undoubtedly thinks Sharon’s to blame for running her mouth to Rey Rosales (Jordi Vilasuso) and leaving her with no choice.

However, Phyllis’ excuses aren’t going to matter much. She stabbed the others in the back and that’s all there is to it. The Young and the Restless spoilers say Nick, Victor, Mariah and Billy Abbott (Jason Thompson) will have to watch this courtroom nightmare unfold. It’ll be like a train wreck they can’t look away from!

Y&R viewers won’t want to miss Friday’s stunning moments. We’ll give you updates as other news comes in. Stay tuned to the CBS soap and don’t forget to check CDL often for the latest Young and the Restless spoilers, updates and news.