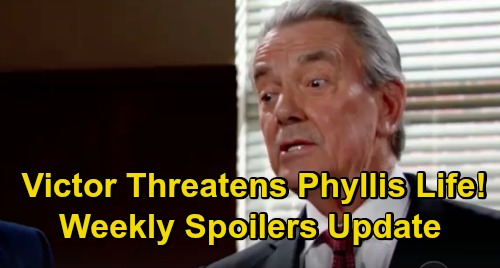 The Young and the Restless (Y&R) spoilers update for the week of February 18-22 tease that some hot drama’s ahead in Genoa City. First, Phyllis Summers (Gina Tognoni) will do some negotiating. She’ll offer Christine (Lauralee Bell) proof against the other cover-up members as well as her testimony in court. Phyllis will hope she can sell the others out and cut a deal to avoid jail time.

Christine will have to weigh her options carefully and so will Mariah Copeland (Camryn Grimes). Since Sharon Newman (Sharon Case) has been lying about everything else, Rey Rosales (Jordi Vilauso) will undoubtedly wonder if Mariah was really too drunk to remember anything that night. Of course, Y&R viewers know Mariah was eventually brought in the loop, so she’ll be in a tight spot.

The Young and the Restless spoilers say Mariah will face pressure to spill everything. That’s a bad idea for many reasons. Mariah won’t want to make matters worse for Sharon or implicate Tessa Porter (Cait Fairbanks) in any way. After all, if Mariah admits what she knows, Rey will want to know how she knows it.

Mariah will definitely want to keep the blackmail situation under wraps. She’ll do her best to dodge a bullet, but this isn’t over. Meanwhile, Kyle Abbott (Michael Mealor) will save Lola Rosales (Sasha Calle) from drowning and get her to the hospital. Her doctors will reveal that she hit her head before falling in the pool, so Kyle will suspect Summer Newman (Hunter King) attacked the competition.

It looks like Mia Rosales (Noemi Gonzalez) is actually to blame, but she’ll hope to hide her actions. She won’t want to reveal that she nearly killed Rey and Arturo Rosales’ (Jordi Vilasuso) sister by going after Abby Newman (Melissa Ordway). However, Mia’s missing earrings could spell trouble. She’ll realize they’re gone, so they just might have fallen off near the Abbott pool house.

Other Young and the Restless spoilers say a special episode will air this week. Y&R will celebrate Melody Thomas Scott’s 40 years as Nikki Newman on February 20. Fans certainly won’t want to miss it! Later, Devon Hamilton (Bryton James) will endure a tough grief setback. He’ll once again struggle with the loss of Hilary Hamilton (Mishael Morgan), so let’s hope Ana Hamilton (Loren Lott) can help him out.

The Young and the Restless spoilers say Victor Newman (Joshua Morrow) will also struggle with a difficult task. He’ll do whatever he can to get Nikki and Victoria Newman (Amelia Heinle) out of their jam, but he’ll inevitably run into problems due to Phyllis the rat.

Nick Newman (Joshua Morrow) will face a bombshell eventually, so he may be surprised by how far Phyllis goes to protect herself. Victor will make a veiled death threat to Phyllis later in week – The Moustache will let the rat know that she’ll have to deal with him if his wife and daughter go down for the J.T. crimes.

It sounds like the excitement’s revving up on the CBS soap. We’ll give you updates as other news comes in. Stay tuned to Y&R and don’t forget to check CDL often for the latest Young and the Restless spoilers, updates, and news.