The Young and the Restless Spoilers: Jason Canela Addresses Rosales Rejection – Says Like It Or Not, Rosales Clan Here To Stay

BY hellodrdavis on February 16, 2019 | Comments: 2 comments
Related : Soap Opera, Spoiler, Television, The Young and the Restless 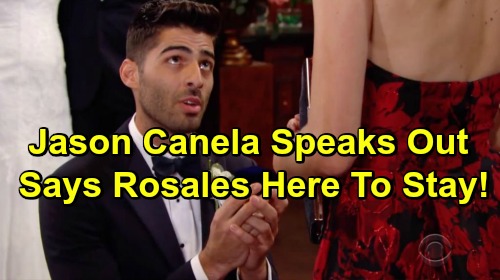 The Young and the Restless spoilers has some news to pass on about a recent Y&R controversy. For the past several months, the Rosales family has been front and center on the CBS soap. Abby Newman (Melissa Ordway) and Arturo Rosales’ (Jason Canela) romance and engagement is a front-burner story, as is the marital discord between Mia Rosales (Noemi Gonzalez) and Rey Rosales (Jordi Vilasuso) and the difficult romance between Lola Rosales (Sasha Calle) and Kyle Abbott (Michael Mealor).

This, in addition to the reduction of screen time for long-running characters like Victor Newman (Eric Braeden) and the firing and recent rehiring of soap vet Doug Davidson, who portrays Detective Paul Williams, has led some fans to question TPTB’s decision to give so much screen time to a “new” family, as opposed to focusing primarily on the Abbotts, Newmans, Chancellors, etc.

Now that there’s been a regime change with the exit of executive producer and head writer Mal Young, some fans have been wondering whether they’ll soon start seeing less of the Rosales family and more of the other families, long-time vets, and recently returned fan favorite Doug Davidson (first airdate March 25 2019).

Of course, whether the regime change will actually produce those results remains to be seen, but one member of the Rosales family is speaking out on the matter. Jason Canela, who portrays Arturo Rosales, was recently interviewed by Soap Central, and he thoughtfully chimed in on the controversy.

Jason said: “I know that there are core families and people who have been on Y&R for 20-plus years, and the Rosales family is a new family, and we’re Latino, and we’re representing a new side that hasn’t been represented before. A lot of people seem to be having a tough time watching it, and I ask myself, in 45 years with this show, all of these families, all of these characters that are here today, although a great part of them have been there for a very long time, they weren’t always there for a long time. They, too, came onto the show as newcomers, and I don’t doubt that people had a hard time accepting them because of whoever they replaced because of whoever they were the they came onto the show.”

Jason continued: “There are so many reasons why a person leaves a show or a person comes onto a show, but what I can assure you is there are no characters who are replacing other characters on this show, at least with our family and the integration of the Rosales family.”

And Jason wrapped up his comments with this: “So, to those who are having a tough time seeing that air time for us, I suggest that they put on their seat belts and buckle down, because the Rosales family seems to be here to stay, and I hope they can learn to love us or love to hate us, because it’s going to be a fun ride.”

What’s your perspective? Are you ok with the Rosales family being front and center, or would you rather see less of them? Stay tuned to the CBS soap and don’t forget to check CDL often for the latest Young and the Restless spoilers, updates, and news.