The Young and the Restless Spoilers: Doug Davidson Back as Paul Williams – Eric Braeden Shares Y&R Return News with Fans 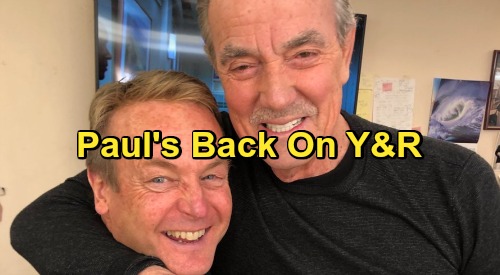 The Young and the Restless (Y&R) spoilers tease that a long-awaited return is on the way. Y&R fans know Paul Williams (Doug Davidson) hasn’t been spotted in Genoa City in quite some time. Davidson even tweeted out that it appeared he’d been let go.

That firing news caused a major uproar among loyal viewers. People tend to get upset when soap vets are pushed aside, especially when a ton of newer characters are battling it out for airtime instead. Fortunately, The Young and the Restless is finally correcting the mistake and putting Paul back on canvas.

Eric Braeden (Victor Newman) has been a vocal supporter of Davidson throughout his absence from the show. He felt like Y&R wasn’t respecting Davidson’s contribution as Paul, so he wasn’t afraid to speak up. The Young and the Restless fans know that Braeden is never shy about sharing his opinions on social media!

Braeden was hopeful that after Mal Young’s departure as Y&R’s head writer and executive producer, Davidson would make a comeback. Now it’s actually happening, so Braeden couldn’t be happier. He tweeted about it and posted a fun pic on Twitter that featured his beloved costar. Braeden and Davidson sported some big grins as they hugged for the camera.

Of course, some viewers were worried that this just might be a quick popup. One concerned Twitter user asked for confirmation on that. She asked, “For the day or for real?” Braeden replied, “Real!!!” It sounds like Paul will be back to business as usual at the police station. He should get in the mix more often from now on.

Naturally, there were many excited comments about Davidson’s return as Paul. A Young and the Restless alum even chimed in on this. Greg Rikaart currently airs as Leo Starke on Days of Our Lives, but he used to play Kevin Fisher on Y&R. Rikaart shared lots of great scenes with Davidson over the years, so he was happy to find out about this comeback. He replied to Braeden’s tweet with three smiley face emojis.

It’s clear that Doug Davidson’s return as Paul is creating some positive buzz. Will other vets and fan favorites head home, too? The Young and the Restless spoilers say some fantastic drama’s ahead in GC, so stay tuned. We’ll give you updates as other Y&R details emerge. Stick with the CBS soap and don’t forget to check CDL often for the latest Young and the Restless spoilers, updates, and news.