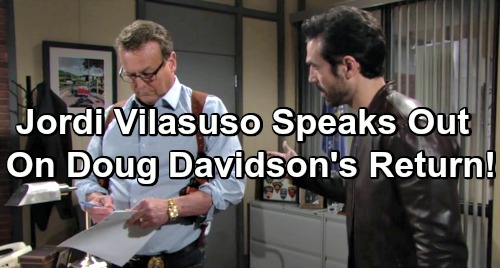 The Young and the Restless (Y&R) spoilers reveal that we’ve got some comings and goings news to pass along. First, let’s talk about some legal help. Michael Baldwin (Christian LeBlanc) can’t handle all the drama single-handedly, so another familiar attorney will be on hand to pitch in. Brittany Hodges (Lauren Woodland) will reappear starting February 18, so look for her to pull off some crafty tactics.

Brittany will have a tough time getting Sharon off the hook for her part in the J.T. Hellstrom (Thad Luckinbill) cover-up. On the bright side, that means Brittany will be around for a while. This won’t just be a quick trip to Genoa City. The Young and the Restless spoilers say this will be an extended visit, so Brittany fans will want to stay tuned.

In other news, Doug Davidson is finally making a comeback as Paul Williams. After Eric Braeden (Victor Newman) broke the news, Davidson tweeted out to thank Braeden as well as loyal Y&R viewers. He credits the fans’ support for his return to the CBS soap.

Davidson said, “Okay! So, the cat is out of the bag. NONE of any of this would happen without all of your undying loyalty, support and kindness. All of you are the reason “Paul” is back on the canvas. THANK YOU SO MUCH. @EBraeden has been incredible the entire time. A huge thanks to him as well!”

Davidson got words of congratulations from several costars of the past. He received positive tweets from Melissa Claire Egan (ex-Chelsea Newman), Greg Rikaart (ex-Kevin Fisher), Jessica Collins (ex-Avery Clark) and Daniel Hall (ex-Scott Grainger). Of course, plenty of thrilled fans tweeted Davidson about the news, too.

Paul’s portrayer even got a tweet from a current costar who was caught up in the previous social media uproar. We haven’t seen Paul in ages, but we’ve seen lots of Rey Rosales (Jordi Vilasuso). That led to some online hate toward Vilasuso, which obviously wasn’t deserved since he was just doing his job.

Even certain Young and the Restless stars were a bit hostile about the Rosales family and their contributions. However, Vilasuso made a move that could be considered quite classy. He tweeted, “Welcome back chief.” Davidson replied that it was great working with Vilasuso again, so it’s nice to know there are no hard feelings on set.

As soon as there’s an official return airdate for Paul, we’ll be sure to let you know. That’s it for comings and goings! We’ll give you updates as other Y&R details emerge. Stick with the CBS soap and don’t forget to check CDL often for the latest Young and the Restless spoilers, updates and news.