The Young and the Restless Spoilers: Mariah and Tessa Arrested Next – Phyllis Implicates Couple In J.T. Crime

BY hellodrdavis on February 17, 2019 | Comments: 4 comments
Related : Soap Opera, Spoiler, Television, The Young and the Restless 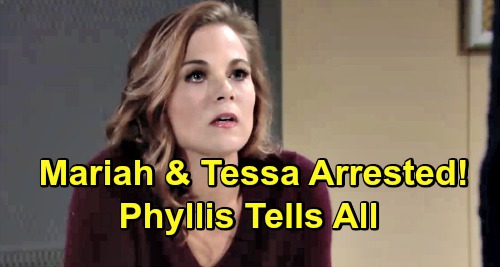 The Young and the Restless spoilers tease that Phyllis Summers (Gina Tognoni) will do everything she can to strike a plea deal with Christine Williams (Lauralee Bell). Phyllis has been saying from the beginning of the coverup crew saga that she’s not going down for Nikki Newman’s (Melody Thomas Scott) crime, and she means it. She’ll offer Christine everything she knows, plus some physical evidence, to avoid jail time.

But if Phyllis truly gives Christine all the details surrounding JT Hellstrom’s (Thad Luckinbill) murder and the coverup, then she’s going to have to implicate two other women in the process who so far have flown under the police radar…and that’s Mariah Copeland (Camryn Grimes) and Tessa Porter (Cait Fairbanks).

Mariah has been in the know about JT’s murder and coverup for a while now. Even though she wasn’t immediately present when JT was killed or buried, she found out about the events later and has certainly obstructed justice for many months.

Same goes for Tessa, plus Tessa chose to blackmail the girls’ night gang rather than going to the police with information about a murder, which the police will frown upon.

If it were up to Sharon Newman (Sharon Case), Nikki, or Victoria Newman (Amelia Heinle), they’d probably omit details from the story that would implicate Mariah and Tessa. Sharon especially would do anything she could to protect her daughter.

But this is Phyllis we’re talking about, and she’s liable to include all the details about Mariah and Tessa if she thought she could walk away from this unscathed.

It certainly looks like things are going to get hairy for Mariah. According to Y&R spoilers, she’ll get questioned by the police soon. Right now, Rey knows that Mariah was in Victoria’s house the night of the murder but was passed out drunk. He’ll likely have questions for her about what she saw and heard in her inebriated state.

But that questioning will surely be excruciating for Mariah. She won’t know what the other cover-up crew members have stated to the police, but she’ll probably suspect that they aren’t talking. She’ll be especially worried about implicating Sharon, and about implicating Tessa if she says the wrong thing.

What Mariah won’t be counting on is someone like Phyllis spilling all the beans, which it certainly looks like Phyllis is going to be doing while Mariah is answering her own questions. If Phyllis does implicate Mariah and Tessa, then they should be the next to be arrested.

Do you think things will go that far? Will Mariah and Tessa get arrested for their crimes? Stay tuned to the CBS soap and don’t forget to check CDL often for the latest Young and the Restless spoilers, updates, and news.