The Young and the Restless Spoilers: Case For Ian Ward J.T. Drama Grows – Maniac Has Means, Motive, and Opportunity 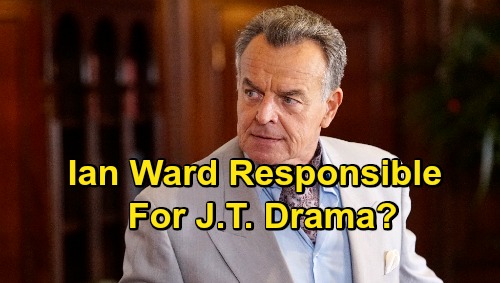 The Young and the Restless spoilers tease that Ian Ward (Ray Wise) almost seems too easy. It would be tired to bring back this character again and make him the villain who’s been tormenting Nikki (Melody Thomas Scott) and framing Victor (Eric Braeden). But that would be the intended head fake.

Wise is, arguably, the best character actor seen on Y&R this decade. To be sure, Stacy Haiduk (Patty), Marla Adams (Dina), and others had (or are having) outstanding runs. But it is fair to assert that Wise’s frantic, on-screen fanaticism set him apart from his fellow thespians. Therefore, whenever this side character returns, the fans would surely be delighted.

The storyline mystery that’s been running for a handful of months involves an interesting point. Who, among all possibilities, has the capacity to have moved J.T.’s (Thad Luckinbill) body, continues to gaslight Nikki for reasons unexplained, and would want to put the screws to Victor?

Okay, most Genoa City residents want to put one over on Victor. But seemingly none of them would have had the connected desire, or ability, to dig up J.T.’s body and also to antagonize Nikki.

It is possible the Y&R’s storyline climax will prove as complex as the tale itself, meaning that two, or more characters are involved in the body move, Victor frame, and Nikki fix? But even then, Ian is an odds-on favorite to be at least one point on that tri-fork.

Ian was last seen being hauled off to prison in 2016, after he kidnapped Nikki and Phyllis (Gina Tognoni), the coverup crew’s self-appointed fixer. So fans could naturally conclude that whatever penitentiary he’s in, say Lakewood, has been holding him. As devoted viewers know though, the man is a master of escape and revival.

The Lakewood setting was referenced because that’s where Lily (Christel Khalil) has been living behind bars. Surely that jumping off point, which is believed to house both women and men, could be used as a connector when Neil (Kristoff St. John), Cane (Daniel Goddard), or Devon (Bryton James) visit, thereby allowing the reintroduction of one of Y&R’s most infamous villains.

Allowing Ian to be the mystery character answer would also enable a quick brush-away. Y&R could reveal him as being the manipulator and then have Rey (Jordi Vilasuso) and hopefully a returning Paul (Doug Davidson), put him in some maximum security prison where Mr. Ward would remain forever, or at least until he’s needed to stir trouble again.