The Young and the Restless Spoilers: Kerry’s Secret Baby Plans – Hiding Fertility Shots from Old Enough to Be a Grandpa Jack? 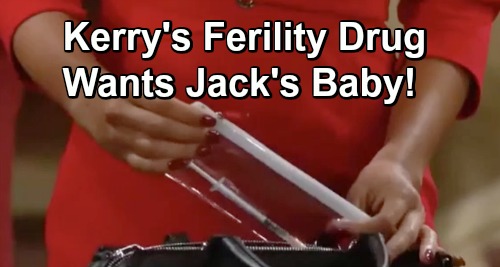 The Young and the Restless (Y&R) spoilers tease that Kerry Johnson (Alice Hunter) will continue to display secretive behavior. She’s obviously keeping something big from Jack Abbott (Peter Bergman), so it’s bound to blow up sooner or later. Kerry was hesitant to get involved with Jack early on, which could have something to do with what she’s hiding. There may have been a reason for Kerry to think twice.

Let’s consider what we know so far. Kerry told Jack that when it comes to dating, she’d never really found “the one.” She didn’t exactly seem hopeful about making that happen until she opened her heart to Jack a bit. However, Kerry has also expressed concern over Jack’s many, many exes. It’s becoming clear to her that Jack may not be the kind of guy who likes to be tied to one woman for long.

Kerry’s been fighting her worries, but a new revelation is a real game-changer. Y&R fans saw Kerry with what appeared to be a syringe full of something, but what’s she doing with it? Kerry doesn’t appear to be a drug addict. It’s possible it’s intended for some sort of revenge on Jack, but that’d be a risky way to target him.

Plus, it seemed like something Kerry needed for herself urgently. There are a couple of routes The Young and the Restless could take. They might go for a transgender storyline here. It would certainly be intriguing to see how Jack would process that revelation.

However, Y&R tends to be cautious about alienating their conservative core fanbase. Sally Sussman, The Young and the Restless’ former head writer, once highlighted the dilemma they face in an interview with Daytime Confidential. After Sussman pitched plans for Mariah Copeland (Camryn Grimes) and Tessa Porter’s (Cait Fairbanks) love story, the execs were both excited and apprehensive.

“The executives at CBS who oversee daytime enthusiastically approved this story; I think they saw the value and the freshness in the way it would be told,” Sussman said. “They did however note that they have a very conservative audience and this story may offend some people. CBS knows their audience very well, which could be the reason Y&R never did a story like this before.”

The Young and the Restless execs might’ve reacted the same way to a transgender pitch from former Head Writer and Executive Producer Mal Young. Perhaps they were both enthusiastic and wary.

Of course, Mariah and Tessa’s relationship is currently going strong. The show’s timid about how they portray a same-sex couple, but they do have one. They could easily follow through on Kerry as a transgender.

Still, it’s wise to keep an open mind about where this storyline’s heading. It’d be a big step for conservative Y&R to take. If Kerry isn’t transgender and that wasn’t a hormone shot, what else could she be hiding? Could that be a fertility shot instead? Could this be about IVF treatments and Kerry’s desire to have a baby?

Since Kerry had never found a guy to settle down with before, she might’ve decided to just have a child on her own. When Jack was so intent on pursuing her, that may have brought complications. Would Jack want another baby at his age? Kyle Abbott’s (Michael Mealor) old enough to be making babies himself!

That would also explain why Kerry’s worried about Jack’s history with other women. If she can get him on board with a kid, Kerry would want stability. She’d need to know Jack isn’t going to bail for some other lovely lady.

There’s also no guarantee this will work, which would explain why Kerry’s choosing to hide it. Why bother bringing it up if it might not pan out? Regardless, Jack will confront Kerry soon. The Young and the Restless spoilers say Kerry will get tripped up by a lie next week, so she’ll have to think fast!

It sounds like some hot drama’s ahead in Genoa City. We’ll give you updates as other Y&R news comes in. Stay tuned to the CBS soap and don’t forget to check CDL often for the latest Young and the Restless spoilers, updates, and news.