The Young and the Restless Spoilers: Kerry’s Transgender Shocker, Hiding the Truth from Unsuspecting Jack? 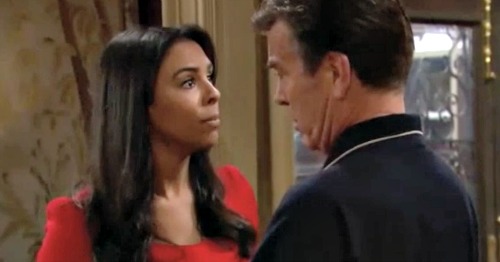 The Young and the Restless (Y&R) spoilers reveal that Kerry Johnson (Alice Hunter) came to Genoa City with some big secrets. She’s been hiding things from Jack Abbott (Peter Bergman) and he’s going to realize that soon enough. In Tuesday’s episode, Kerry exhibits some suspicious behavior. She leaves Jack a bit baffled thanks to her very mixed signals.

First, Kerry hands over a cologne she had specifically formulated just for Jack. She calls it Jack of Hearts, so he’s thrilled by the personal gift. It’s worth mentioning that the music in that scene is sentimental and not ominous, so that could be a clue. The Young and the Restless could just be trying to throw everyone off, but for now it seems like a genuine effort to make Jack feel special.

Later, Jack catches Kerry going for her purse and assumes she’s trying to bail on him. She covers and eventually pulls out a hypodermic needle in private. Y&R spoilers hint that Kerry will be spotted with more of those as time goes on. What is this chemist hiding? Probably not a drug problem if she’s so great at her job. Kerry has shown no signs of spacing out or slacking off at work.

That narrows things down a bit. Kerry has been guarded about her past and was hesitant to get involved with Jack in the first place. Is that because she was afraid of what he might find out about her? Was Kerry born a boy? The Young and the Restless might be gearing up for a transgender storyline similar to what The Bold and the Beautiful did.

Now we have to point out the obvious. Y&R is incredibly wary of storylines that go against what their conservative core fanbase wants. Case in point: Mariah Copeland (Camryn Grimes) and Tessa Porter’s (Cait Fairbanks) relationship. It took nearly a year after their first kiss for the show to put them together. Even now, they often rely on quick cutaways when it comes to lip locks and sex is never mentioned.

However, The Young and the Restless has stuck with the story. They’ve had plenty of opportunities to break Mariah and Tessa up, but they’ve stayed the course. Perhaps Camryn Grimes’ Daytime Emmy win had a little something to do with that. Her stellar performance was acknowledged and generated some positive buzz for the show. It might’ve been the motivation Y&R needed to take the risk and make “Teriah” a real couple.

There was also the abuse storyline last year, which was edgy by Y&R standards. The Young and the Restless’ former head writer and executive producer, Mal Young, went for it despite the backlash. As a result, Amelia Heinle (Victoria Newman) will surely receive a Daytime Emmy nomination. She might even walk away with a victory depending on what category she chooses to submit in.

We wouldn’t be surprised to see a nom for Thad Luckinbill (J.T. Hellstrom) either. Giving Y&R stars solid material is a good thing, even if a big chunk of the audience might disapprove. That could be why the show’s possibly taking the transgender route with Kerry. Peter Bergman and Alice Hunter would get a chance to really shine.

If Mal Young knew he was on his way out, that’d be another reason for him to take the leap. What did he have to lose? It’s not like they could fire him over it! Regardless, the signs are there and could easily point to Kerry’s secret being that she’s transgender. Will Jack find out that shocker soon?