BY Heather Hughes on January 15, 2019 | Comments: one comment
Related : Soap Opera, Spoiler, Television, The Young and the Restless 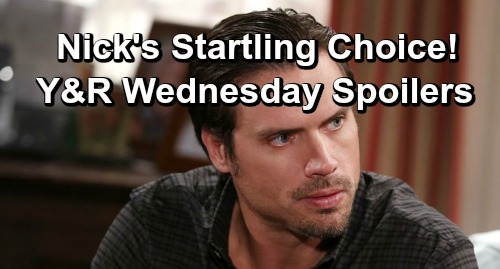 The Young and the Restless (Y&R) spoilers for Wednesday, January 16, tease that Cane Ashby (Daniel Goddard) will prepare for a difficult day. It’s always tough to put on a brave face and endure a visit with Lily Ashby (Christel Khalil). Cane loves his wife, but her prison sentence has been brutal on their whole family. The pressure’s been rising and that’s led Cane to keep some huge secrets.

Cane feels guilty for letting himself spin out when Lily’s the one who’s locked up. As for Lily, she can’t worry about much more than surviving. Life isn’t easy behind bars, so Lily’s just doing the best she can to get through this.

Cane will try to be supportive on Wednesday, but that plan won’t work out very well. Lily’s attitude will take this visit in a startling direction, so Cane’s sure to face a crushing blow.

It sounds like Lily will have some news for her husband. She already sent a letter to Cane and talked about how hard it was to communicate with him. Cane’s stuck in their past together and Lily’s faced with the harsh reality of now. She doesn’t feel like the woman she used to be, so she’s not interested in trying to live up to those old standards.

Lily make think it’s best if Cane doesn’t stop by anymore. She might suggest that it’d be better for both of them if they just kept their distance. Cane doesn’t feel like a good spouse anymore, but Lily is undoubtedly feeling the same way.

She must be beating herself up over all the time she’s missing and how she can’t be there for the fam. Lily may not even think she can be there for them after she’s free.

That could lead to another startling decision. Will Lily tell Cane she wants a divorce? Since we know Cane and Victoria Newman (Amelia Heinle) will be making out again by the end of the week, Cane will need another reason to do that. A distressing divorce request from Lily would certainly do the trick.

Regardless, Cane’s visit with Lily won’t turn out the way he expects. He’ll need some support from Victoria’s lips to get over it! In the meantime, Y&R fans can watch Nick Newman (Joshua Morrow) change his mind about something. What will it be? Will it involve how Nick’s handling the J.T. Hellstrom (Thad Luckinbill) drama?

Perhaps Nick will decide that he can’t just sit back and trust Michael Baldwin (Christian LeBlanc) to handle this. Victor Newman (Eric Braeden) accepts Michael’s help on Tuesday, but that doesn’t mean it’ll be enough. The Young and the Restless spoilers point to a possible fake confession from Nick soon, so we could see the first rumblings on Wednesday.

Will Nick pretend he killed J.T. to let Victor go free and reunite with stressed Nikki Newman (Melody Thomas Scott)? The Young and the Restless fans will be eager to see where this story heads next. We’ll give you updates as other Y&R details emerge. Stick with the CBS soap and don’t forget to check CDL often for the latest Young and the Restless spoilers, updates, and news.