The Young and the Restless Spoilers: Victor Pulls Scott Into His Evil Web – Sharon Freaks Over The Moustache’s Plot

BY Heather Hughes on October 31, 2017 | Comments: one comment
Related : Soap Opera, Spoiler, Television, The Young and the Restless 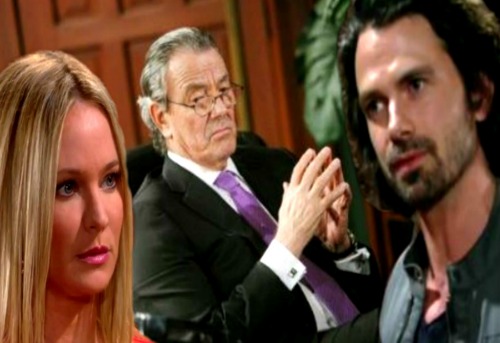 The Young and the Restless (Y&R) spoilers tease that Victor (Eric Braeden) and Scott’s (Daniel Hall) bond will grow stronger. When Victor paid the ransom and rescued Scott in the Middle East, it kicked off a nice relationship. Scott knows he could never repay for Victor for everything he’s done, but working at Newman is something at least.

Scott turned to Victor for help with another crisis recently, but Vic handed him over to the cops instead. However, Scott won’t hold a grudge. After all, Victor was dealing with a family emergency. He didn’t have time to make Scott’s murder setup go away. Victoria’s (Amelia Heinle) life was on the line and the Newman clan always comes first.

Still, it’s looking more and more like Scott will become an honorary member of Victor’s brood. He may not have the Newman name, but he could be treated like one. Victor knows that Scott’s a smart man with many talents.

Since Adam’s (Justin Hartley) gone and Nick (Joshua Morrow) is an epic disappointment, it seems Victor will cling to Scott as a substitute son. He’ll certainly be thankful when Scott exposes the sex ring and gets Abby (Melissa Ordway) away from the monster she’s dating. Zack’s (Ryan Ashton) going down and Scott’s just the person to get the job done.

Plus, The Young and the Restless spoilers say Victor will need extra help at the company. There’ll be plenty of backlash for Newman Enterprises, so Scott could get a major promotion. Victor will need his right-hand man to deal with the problems that are looming. They may have to make some devious moves in an attempt to keep Newman afloat.

Scott’s growing feelings for Abby should be part of all this. It’s obvious that Scott cares about her, so he’ll be willing to do whatever it takes to undo the damage. Little by little, Y&R spoilers hint that Victor could pull Scott into his dark world. It may not be as shady as Zack’s, but it’s not exactly a warm and fuzzy place.

Sharon (Sharon Case) and many others have tried to warn Scott. Everyone in town knows how tricky Victor can be, but Scott apparently sees the good in him thanks to their history. How will Sharon feel as Scott gets wrapped up in dirty Newman business? Will the changes in him scare her off?

If Scott’s Newman mindset doesn’t turn Sharon against him, a cheating scandal definitely would. Victor will likely push Scott and Abby together once Zack’s out of the picture. That could be the last straw for Sharon. She may not recognize the man she’s dating anymore.