The Young and the Restless Spoilers: Billy’s Revenge Blows Up in a Big Way – Cane’s Brutal Downfall, Victoria’s Secrets Unravel 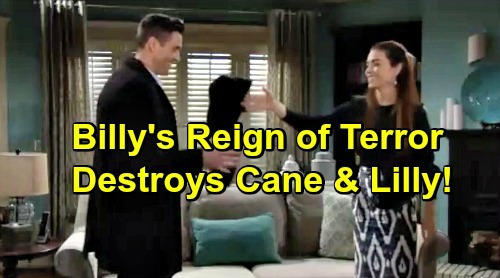 The Young and the Restless (Y&R) spoilers tease that Billy Abbott (Jason Thompson) will feel betrayed once again. On Thursday’s new Y&R episode, January 17, Phyllis (Gina Tognoni) admits Billy tried to get back together with her first. That leaves Victoria Newman (Amelia Heinle) feeling like a rebound, so she chooses to rebound her way back to Cane Ashby’s (Daniel Goddard) lips.

After Billy finds Victoria kissing Cane on Friday, he’ll unleash his wrath. Billy was just starting to think Victoria was his soul mate, but will this change his mind? It seems like it could since Y&R spoilers say Billy will crave revenge. Most his anger might be directed at Cane since they’re rivals already, but Victoria may not be spared either.

Billy has proven that he tends to act now and think later. After Phyllis’ betrayal, it wasn’t long until Billy hopped in bed with Summer Newman (Hunter King). He ultimately regretted it and there’s a good chance he’ll regret what he does next, too.

The Young and the Restless spoilers say Billy will divulge a secret during the week of January 21-25. He may end up spilling what he knows to Jill Atkinson (Jess Walton) or possibly someone connected to Lily Ashby (Christel Khalil). Billy could easily blab about Cane’s kissing fling to Neil Winters (Kristoff St. John) or Devon Hamilton (Bryton James).

There’s even been some Y&R buzz that suggests Billy might pay Lily a visit and spill the shocker himself. That seems a bit extreme since Lily’s having such a hard time as it is. However, we can’t rule it out. Billy formed a bond with Sharon Newman (Sharon Case) after Nick Newman’s (Joshua Morrow) hot night with Phyllis was revealed. He likes to seek out other lonely broken-heart club members.

Regardless, telling anyone the truth is could end in disaster. Secrets spread like wildfire on soaps, so it’s just a matter of time until someone else blabs and someone else eavesdrops. Before you know it, the whole town’s shouting about it and everything has completely fallen apart.

The Young and the Restless spoilers say this shocker will blow up in a huge way, so Victoria and Cane had better be ready. Cane has the most to lose here since word could get to Lily sooner or later. Although Mariah Copeland (Camryn Grimes) probably wouldn’t resort to such a gossipy story on GC Buzz, there are other news outlets that could cover the latest Newman bombshell.

Cane could lose his marriage and alienate his kids over this. You can bet Charlie Ashby (Noah Alexander Gerry) and Mattie Ashby (Lexie Stevenson) will blast their dad for cheating on Lily while she was in prison. She’s the one who’s truly suffering here. Cane’s busy whining and locking lips with another woman when he should be stepping up for his family.

Of course, there are risks for Victoria as well. This could lead to more scrutiny for her family, which is the last thing they need right now. Nikki Newman (Melody Thomas Scott) killed J.T., Victoria helped cover it up, Victor Newman (Eric Braeden) is behind bars for it and Nick will likely take the blame eventually. Victoria certainly doesn’t want cheating news story caught in the middle of all this.