BY hellodrdavis on January 14, 2019 | Comments: 4 comments
Related : Soap Opera, Spoiler, Television, The Young and the Restless 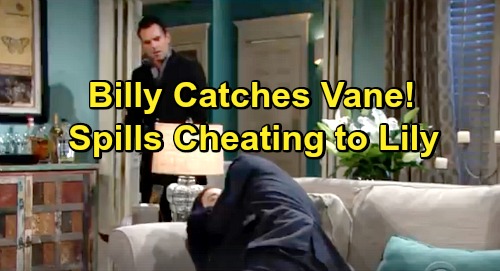 The Young and the Restless spoilers tease that Billy Abbott (Jason Thompson) is going to get a big shock. He and Victoria Newman (Amelia Heinle) have been rekindling their relationship lately. They spent a sweet Christmas with their kids, and Billy has stood by Victoria’s side as she’s faced Victor Newman’s arrest, Nikki Newman’s latest health scare, and her problems with Reed Hellstrom (Tristan Lake Leabu).

But Victoria’s keeping a big secret from Billy. She shared a passionate kiss with Cane Ashby (Daniel Goddard), and it happened to be on the exact same day that Billy and Victoria kissed as well. Billy’s oblivious to Victoria’s obvious attraction to Cane, and Victoria would like to keep it that way.

But it seems that Billy’s going to find out about Cane and Victoria in a very up-close-and-personal way. According to The Young and the Restless spoilers, Billy will walk in on Cane and Victoria sharing yet another passionate kiss in Victoria’s living room. This is something that Billy will not have seen coming, and he’ll be utterly shocked.

Victoria will probably scramble to explain away the kiss, but even she doesn’t truly understand what’s going on between herself and Cane. However, Billy will think he understands the situation clearly…he’ll think Victoria was just stringing him along when all along she was having an affair with Cane.

Y&R spoilers indicate that Billy may do something rash in response to what he walked in on. Billy will find himself wanting revenge, and that could spell huge disaster for Cane. If Billy decides to go after Cane to get him back for pursuing Victoria, that could lead him straight to Lily Ashby (Christel Khalil).

It would be a horrible thing to do, but might Cane go to Lily in prison and tell her that he caught Cane cheating on her with Victoria? It would be devastating for Lily, who wouldn’t be able to do anything about it but sit and stew in her jail cell. And it would likely be the straw that broke the camel’s back for Cane and Lily’s marriage – a Lane divorce could quickly follow.

Cane and Lily are already in a weakened state and don’t know how to relate to each other. The sudden revelation that Cane has cheated on Lily by kissing Victoria may be the death knell for their relationship. If Billy’s truly out to destroy Cane, then telling Lily about Cane and Victoria’s kiss would definitely be the way to go.

Do you think that Billy will spill what he witnessed to Lily? Stay tuned to the CBS soap and don’t forget to check CDL often for the latest Young and the Restless spoilers, updates, and news.