BY hellodrdavis on January 13, 2019 | Comments: 3 comments
Related : Soap Opera, Spoiler, Television, The Young and the Restless 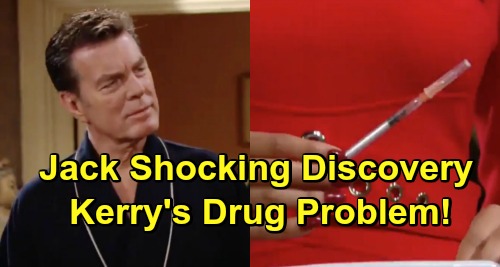 The Young and the Restless spoilers tease that Kerry Johnson (Alice Hunter) has a big secret. Ever since Kerry was recruited by Jabot Cosmetics, she has been an outstanding asset to the company. She joined Jabot at a time when Ashley Abbott (Eileen Davidson) had just taken off with the company’s key formulas. Kerry had to develop new formulas pronto, and she did so quickly and with ease.

In fact, CEO Phyllis Summers’ (Gina Tognoni) success at Jabot has been largely due to her ability to get Kerry on board as chief chemist. It seems that Kerry has been driving Jabot’s success lately, and she’s seemed to handle the demanding job with everlasting energy and grace.

Kerry has even had time to squeeze in a romance with Jack Abbott (Peter Bergman) in the midst of her Jabot duties. The two have enjoyed a whirlwind romance, complete with a romantic getaway to Bora Bora.

But soon, we’ll see another side of Kerry. According to The Young and the Restless spoilers, Jack will catch Kerry in a lie. Neither viewers or Jack knows much, if anything, about Kerry’s past. It’s possible that she’ll get caught in a lie about her personal life or romantic history. Whatever it is, it will be enough to concern Jack.

And in the new Y&R weekly video promo, Kerry is shown concealing a hypodermic needle in her purse. Could it be that Kerry has some sort of secret drug problem? It’s a terrible thought, but what other explanation could there be for Kerry carrying around a needle with her? Sure, she could be diabetic and need insulin, but that wouldn’t be something that she’d need to keep a secret.

If it turns out that Kerry does have a drug issue, then it will likely have serious ramifications for her job and her relationship with Jack. Jack’s been down the prescription drug addiction road himself, and it may give him pause if he learns that Kerry is struggling with addiction, especially if she tries at first to lie to him about the problem.

Do you think Kerry may have a problem with drugs? Stay tuned to the CBS soap and don’t forget to check CDL often for the latest Young and the Restless spoilers, updates, and news.