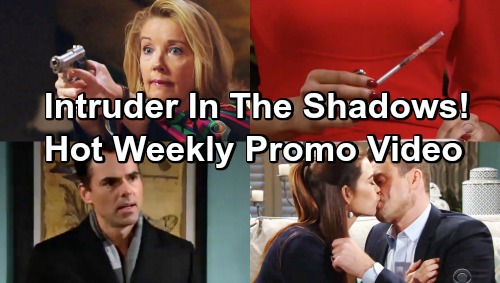 The Young and the Restless (Y&R) spoilers preview promo video for the week of January 14-18 tease that some bombs are about to drop in Genoa City. For starters, Phyllis Summers (Gina Tognoni) will deliver a shocker to Victoria Newman (Amelia Heinle). She’ll note that Billy Abbott (Jason Thompson) came crawling back to her before he started his “Villy” reunion attempt.

Once Victoria is in the loop, she’ll think Billy’s just been working his way through the reject pile. Victoria feel like a backup plan, but Billy will promise she’s the only one he wants a future with. Meanwhile, Cane Ashby’s (Daniel Goddard) visit with Lily Ashby (Christel Khalil) will end in disaster. She’ll blindside him with some news that leaves him looking for comfort.

Lily may decide she doesn’t want Cane to visit anymore. She could even suggest that divorce is their best option. Regardless, Cane will find himself making out with Victoria later. When Billy spots them kissing passionately, he’ll look shocked and furious. This certainly a sight Billy wanted to walk in on.

Over with Mia Rosales (Noemi Gonzalez), she won’t be able to get Arturo Rosales (Jason Canela) off her mind. Rey Rosales (Jordi Vilasuso) will assure Mia that nothing happened during his overnight trip with Sharon Newman (Sharon Case), but it won’t matter. This isn’t even about Rey anymore. Mia and Arturo clearly have some sort of magnetic pull, so it’ll undoubtedly get them in trouble soon.

Speaking of trouble, Kerry Johnson (Alice Hunter) could land in some. She’ll at least face a tight spot when Jack Abbott (Peter Bergman) finds her with what appears to be a hypodermic needle. The Young and the Restless spoilers say Kerry may fib about the needle’s real purpose. She might suggest she needs insulin for diabetes or something along those lines.

However, Kerry will get tripped up by a lie during new Y&R episodes the week of January 21-25, so that tells us she probably won’t be so truthful this week. The truth will also be something Nikki Newman (Melody Thomas Scott) fears. Who’s really tormenting the cover-up crew and framing Victor Newman (Eric Braeden)? Y&R fans could be on the verge of learning his or her identity soon.

The Young and the Restless weekly promo shows Nikki getting spooked by an intruder. As a shadow dances along the wall, Nikki will grab a gun and take aim. She’ll be ready to shoot, but is this everything it seems to be? We all know how soaps love fake-outs, so perhaps we shouldn’t get too excited just yet. It could easily be Nick Newman (Joshua Morrow) or another loved one coming to check on Nikki.