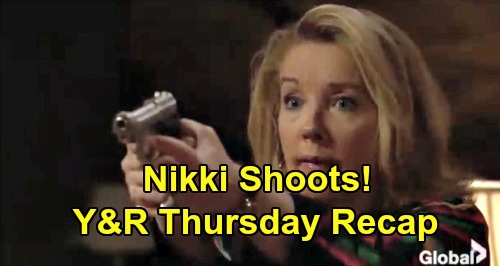 The Young and the Restless (Y&R) spoilers update and recap for Thursday, January 17, tease that Cane Ashby (Daniel Goddard) will have to dodge some questions. Charlie Ashby (Noah Alexander Gerry) and Mattie Ashby (Lexie Stevenson) will be curious about Cane’s visit with their mom. Cane will give them some vague updates on Lily Ashby (Christel Khalil), but he’ll stay tight-lipped about how tense things got.

Meanwhile, Billy Abbott (Jason Thompson) will reflect on the past. He’ll talk to Victoria Newman (Amelia Heinle) about his hit-and-run accident, which happened three years ago. Billy will remember the way Delia Abbott (Sophie Pollono) appeared to him and how it all led to his reunion with Victoria. He’ll want to be a family again, but he’ll agree to start with a simple lunch date.

Other Young and the Restless spoilers say Phyllis Summers (Gina Tognoni) will head over to the ranch. She’ll want Nikki Newman (Melody Thomas Scott) to confirm she confessed to killing J.T. Hellstrom (Thad Luckinbill). After bickering a bit, Nikki will admit she indeed made an admission to Nick Newman (Joshua Morrow).

Over with Fenmore “Fen” Baldwin (Zach Tinker), he’ll be excited to hear his song at the coffeehouse. Sharon Newman (Sharon Case) will mention that she found an online playlist that featured it. She’ll be happy for Fen and suggest that she hopes his music career turns out better than Tessa Porter’s (Cait Fairbanks).

When Fen hears about Tessa being dropped from Devon Hamilton’s (Bryton James) label, he’ll realize what’s at stake. Fen will have to stay in line or his dreams could go up smoke, too. Later, Sharon will meet up with the rest of the cover-up crew. She’ll be furious over Nikki’s big mouth, but Nikki will insist she did her best to protect Phyllis and Sharon.

Phyllis will maintain that it was a bad call, but what’s spilled can’t be un-spilled. Y&R spoilers say they’ll determine that someone wants all this infighting. Nevertheless, Phyllis will refuse to go down for J.T.’s murder. She’ll make it clear that it’s not happening before she exits. As for Nikki, she’ll turn down Sharon’s offer to stay at the cottage for safety. Nikki would rather catch their tormentor at the ranch.

Once Nikki’s back at home, somebody will indeed creep through the hallway. Nikki will grab a gun as a shadow forms on the wall. She’ll look terrified as she fires a shot in the direction of the intruder. Whether this is a newly free Victor Newman (Eric Braeden) or someone sinister, he or she should be shocked!

In the meantime, Phyllis will stir up more trouble. The Young and the Restless spoilers say she’ll interrupt Billy and Victoria’s date at the GCAC. During this strained conversation, Victoria will push Phyllis to concentrate on her relationship with Nick. That’ll prompt Phyllis to reveal that Billy tried to get back together with her before Christmas.

Victoria will leave in a huff as she processes the idea of being Billy’s rebound. Cane will follow Victoria back to her place in hopes of retrieving a scarf. Back with Billy, he’ll blast Phyllis for upsetting Victoria. He’ll think he made a mistake by asking Phyllis to reunite. Billy will declare that Victoria is the love of his life, so he’ll think betraying Jack Abbott (Peter Bergman) with the affair was a mistake, too.

At Victoria’s house, she’ll tell Cane about feeling like the backup plan. Cane will get how it feels to be left out. One thing will lead to another and before you know it, they’ll be making out. At Devon’s penthouse, Neil Winters (Kristoff St. John) will talk about spending some of his time at Lakewood and some of his time back in Genoa City. He’ll intend to help Devon out with the label.

The Young and the Restless spoilers say Ana Hamilton (Loren Lott) will insist her “friend” won’t be pushed around. She’ll warn he could walk away if they go after him too hard on this songwriting contract. Devon will eventually decide they should buy the song and skip the future profits for this songwriter. Ana will think that’s a good plan, but Fen will believe it’s a terrible one.

Since Ana is the songwriter, Fen obviously won’t want her to throw away all the future cash. However, Ana will claim her “friend” is eager to get paid right away. A little later, Devon will call Michael Baldwin (Christian LeBlanc) and ask for help in learning this songwriter’s identity.

It sounds like Ana’s secret won’t be a secret for much longer. We’ll keep you posted as other Y&R news comes in. Stick with the CBS soap and don’t forget to check CDL often for the latest Young and the Restless spoilers, updates, and news.