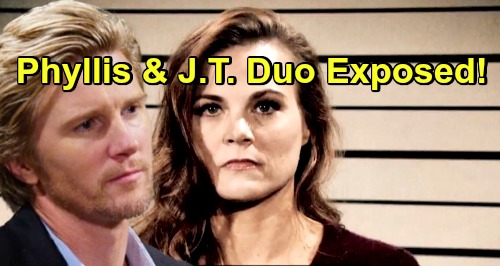 The Young and the Restless (Y&R) spoilers tease that J.T. Hellstrom (Thad Luckinbill) is most likely alive and just waiting for the perfect moment to strike. Now that we’ve got confirmation on Thad Luckinbill’s return to Y&R, it seems obvious that J.T. survived and has been targeting the cover-up crew. It fits with all the facts, so we should probably brace for J.T.’s back-from-the-almost-dead shocker.

The show basically revealed this twist by posting a set pic of Luckinbill, so they must feel confident another surprise can keep fans interested. Could the real bombshell be J.T.’s secret partner? It makes sense that J.T. would need a little help along the way. He clearly had to avoid being seen in Genoa City or else he would’ve been arrested. At times, J.T. might’ve relied on a right-hand man…or woman.

Phyllis Summers (Gina Tognoni) certainly could’ve entered an alliance with J.T. She’s proven that she’ll do whatever it takes to protect herself. J.T. might’ve convinced Phyllis this would go a lot better for her if they teamed up. He could’ve threatened Phyllis or even just made the tantalizing offer of framing Victor Newman (Eric Braeden) together.

How could Phyllis pass up the chance to avoid consequences AND make Victor pay? Y&R viewers will recall how Phyllis was quick to point the finger at Victor. She tried to make Nick Newman (Joshua Morrow) think his father was guilty before Nick learned the truth.

The one thing that could unite Phyllis and J.T. would be their mutual disdain for Victor. They both loathe him completely, so that might’ve been reason enough for Phyllis to accept the offer. Perhaps Phyllis has been feeding J.T. crucial info throughout this nightmare. The tormentor was always in the loop on the cover-up crew’s activities, so maybe that was because Phyllis was spilling the details.

After all, The Young and the Restless won’t just let Phyllis walk free while the others suffer. There has to be some sort of downfall brewing, so this could be it. Phyllis didn’t pay for J.T.’s murder since she ratted out the others. What if J.T. turns up alive and rats out Phyllis? It would serve her right! J.T. would have a motive to retaliate since Victor’s not behind bars like he wanted.

This could also be what brings J.T. out of hiding. His botched plan and the desire to target Victor may be too much to bear. Whether J.T. gets caught and tells the cops or just sends a message instead, Phyllis could face snitching karma. J.T. could have proof that’ll bring Phyllis down for setting Victor up.