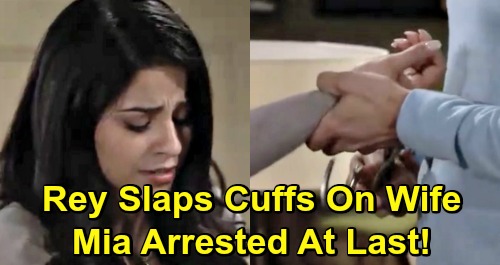 The Young and the Restless (Y&R) spoilers tease that another shocking arrest is coming up, but this one won’t be related to the J.T. Hellstrom (Thad Luckinbill) chaos. There’s another culprit who’s going down and that’s Mia Rosales (Noemi Gonzalez). Y&R viewers know Mia got drunk and stormed over to the Abbott property. She mistakenly attacked Lola Rosales (Sasha Calle), so she’ll have to pay the price.

Mia feels horrible about her actions, so we’ll give her a few points for that. Not too many though! We shouldn’t feel sorry for the woman who was willing to smack Abby Newman (Melissa Ordway) to the concrete. The fact that unsuspecting Lola got caught up in this only makes matters worse.

Of course, there are going to be two red flags that trip Mia up. The first one is the coat Lola was wearing. Rey should ultimately confirm that coat belongs to Abby, who fought with Mia before the attack. That may not help Rey connect the dots right away, but it could leave him suspicious. He might eventually deduce that the attacker got the wrong gal, which could lead him to confront Mia.

Naturally, Mia would deny, deny, deny. It’s doubtful she’d be willing to spill all just because of the parka Lola wore. That’s certainly not proof that Mia gave Lola the fateful shove. Mia might act outraged that Rey could even think such a thing. She could try to make Rey feel guilty for accusing her and hope he backs off the idea.

Mia might get by with that, but what about the earring? That could be the second red flag that scores Mia’s arrest. Rey has been known to give Mia jewelry. Those earrings might’ve been a present from Rey at some point. If not, Rey could still recognize the distinctive style. As a detective, he’s trained to pick up on little details.

It looks like Rey may examine the earring in evidence and notice the matching one in Mia’s jewelry box later. Regardless, Mia will get busted! The Young and the Restless spoilers say Rey will slap some handcuffs on Mia at their apartment next week, February 25-March 1. She’ll start to cry as Rey tells her she has the right to remain silent.

At least the playing field is level when it comes to the women in Rey’s life. Rey arrested Sharon Newman (Sharon Case) on the spot, so it’s only fair for him to arrest Mia immediately, too. Most Young and the Restless fans are eager to watch Mia go down, so this will definitely be something to tune in for.

Are you excited about Mia’s arrest and all the drama it’ll bring? We’ll give you updates as other Y&R news comes in. Stick with the CBS soap and don’t forget to check CDL often for the latest Young and the Restless spoilers, updates, and news.