BY Heather Hughes on February 22, 2019 | Comments: one comment
Related : Soap Opera, Spoiler, Television, The Young and the Restless 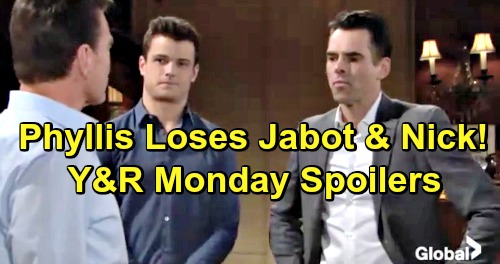 The Young and the Restless (Y&R) spoilers for Monday, February 25, tease that Billy Abbott (Jason Thompson) will rip into Phyllis Summers (Gina Tognoni). His head must be spinning over the situation Victoria Newman (Amelia Heinle) is in. Billy will play the blame game and insist that Phyllis made this so much worse. He’ll feel like Phyllis has no sense of loyalty at all.

Furthermore, Billy will think Phyllis has put Jabot at risk. Phyllis scored an immunity deal in exchange for testimony that incriminates the others. Billy will know this is going to turn into a huge scandal for the company. He’ll think Phyllis has jeopardized the Abbott family legacy, so he certainly won’t be happy about that.

The Young and the Restless spoilers say Phyllis will defend her actions and argue that she’s helping the other ladies. She’ll want Billy to see this from her perspective, but he just won’t think it’s right. As for the company’s crisis, Phyllis will think she’s got a grip on that, too. She’ll vow to keep leading Jabot in a positive direction, but Billy will feel like she’s set them up for disaster.

The wheels will start turning for Billy soon enough. He’ll determine that the Abbotts should get back in the driver’s seat. None of them were very happy about Phyllis taking the CEO seat in the first place. Jack Abbott (Peter Bergman) accepted that Phyllis won it fair and square, but the circumstances have changed. Billy will craft a pitch for a takeover and deliver it to Jack later on new Y&R episodes the week of February 25-March 1.

In the meantime, Y&R fans can expect another lecture for Phyllis. She’ll meet with Nick Newman (Joshua Morrow), who’ll blast Phyllis for keeping her immunity deal a secret. Phyllis passed up the chance to tell Nick what she’d done. She kept her mouth shut and just let it blow up in Friday’s episode.

After Nick has a chance to mull everything over, he’ll wisely change his mind about their future together on Monday. Nick won’t stand by a woman who could hurt his family so deeply. The Young and the Restless spoilers say Nick will break up with Phyllis and cut ties with her entirely. He’ll want her to move out right away and stay out of his sight.

It sounds like the drama is revving up in Genoa City. We’ll give you updates as other Y&R news comes in. Stick with the CBS soap and don’t forget to check CDL often for the latest Young and the Restless spoilers, updates, and news.