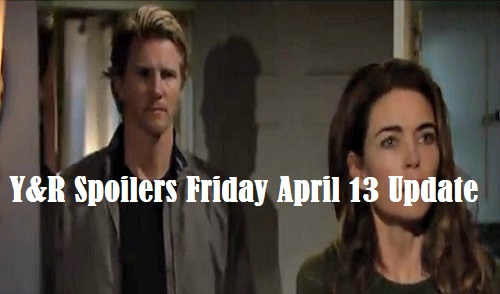 The Young and the Restless (Y&R) spoilers for Friday, April 13, tease that Victoria (Amelia Heinle) will spill all to her party guests. She’ll talk about the many times J.T. (Thad Luckinbell) belittled her and made her feel like a loser. Victoria will suggest that she felt ashamed for letting him run her life.

The other ladies will be supportive as Victoria continues. She’ll point out that J.T. caused great suffering for Mac (Kelly Kruger) as well. Victoria will suggest that J.T. had a way of twisted his criticism into concern. She’ll add that the abuse wasn’t just emotional and describe their physical fight.

Sharon (Sharon Case), Nikki (Melody Thomas Scott) and Phyllis (Gina Tognoni) will be horrified by Victoria’s next admission. She’ll tell them that J.T. grabbed her by the throat and slammed his fist into the wall. When asked why she stuck around, Victoria will contend that she thought they could repair their damaged relationship. She’ll see that she was wrong about that. 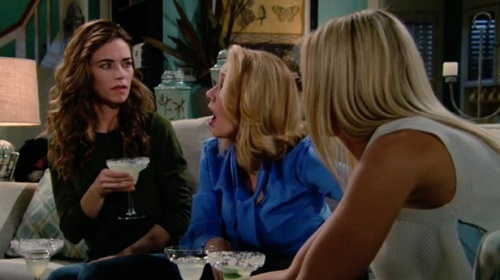 Victoria will also mention how J.T. was investigating Victor (Eric Braeden) and eventually leaked the memo. An appalled Nikki will vow to keep J.T. away from her daughter. Meanwhile, J.T. will grow frustrated when Victoria doesn’t return his texts or calls. He’ll bump into Cane (Daniel Goddard) and explain that his engagement is over.

An oblivious Cane will encourage J.T. to fight for what he wants. The Young and the Restless spoilers say J.T. will take the advice and offer a warning. He’ll note that Cane might hear some gossip about him soon. J.T. will suggest that Cane can decide if he wants to believe it.

After Victoria steps outside her house for air, Nikki will join her. They’ll share a sweet chat before heading back inside. Y&R spoilers say Sharon and Phyllis will want to be there for Victoria. Nikki will express her gratitude to them as Victoria heads upstairs.

In the bathroom, Victoria will get a real shock. She’ll see J.T.’s reflection in the mirror and freak out. J.T. will confess that he climbed on the roof and managed to get inside. He’ll refuse to give up on his love story with Victoria, but she’ll just order him to leave.

It won’t be long until this turns into a fierce faceoff. J.T. will argue that Victoria simply let Mac brainwash her. He’ll get vicious as he snaps that nobody’s good enough for Victor’s daughter. J.T will mention that Vic tried to drive him out of town before his fall. He’ll wish that the old man was dead.

Suddenly, everything will start to click for Victoria. She’ll determine that J.T. pushed Victor and left him at the bottom of the stairs to die. Victoria will assume J.T. turned off Victor’s life support, too. When she starts to call the cops, J.T. will take action. They’ll end up in a brutal brawl as Victoria scrambles to escape.

Once the women downstairs hear the ruckus, they’ll rush up to help. The Young and the Restless spoilers say Nikki will bash J.T. in the head with a fireplace poker! Everyone will freeze as J.T. tumbles to the floor, so major drama’s looming. We’ll give you updates as other news comes in. Stick with Y&R and don’t forget to check CDL often for the latest Young and the Restless spoilers, updates and news.