The Young and the Restless Spoilers: Phyllis’ Betrayal and Mia’s Pregnancy Send Nick and Sharon To Shick Reunion

BY Sean O'Brien on February 25, 2019 | Comments: one comment
Related : Soap Opera, Spoiler, Television, The Young and the Restless 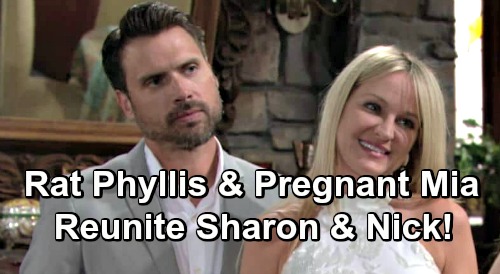 Phyllis had to know that running the bus over the coverup crew, which includes Nikki (Melody Thomas Scott), Vickie (Amelia Heinle), Sharon (Sharon Case), and Mariah (Camryn Grimes) would result in consequences. But she likely figured that Nick could be nuanced, which feels like a major miscalculation.

Shick fans know that betrayal twice ended hopes of Sharon and Nick remarrying. Five calendar years ago, Phyllis’ revival from a coma enabled Tognoni to replace Michelle Stafford in this role. The new Red’s dramatic entrance into the church, at the exact time when Sharon and Nick were in the midst of their nuptials, resulted in Nick learning that his almost-again wife lied about Summer’s (Hunter King) paternity, positing that Jack (Peter Bergman) was her biological father.

Last fall, as Sharon and Nick were again trying to be remarry, Sharon outed her intended husband as a cheater. Yes, she knew that he’d been with Phyllis a handful of months prior. Y&R borrowed from 2014, flipped the script and wrote Tognoni’s character into the villain role, along with Nick.

This time around the focus will shift to Nick as the aggrieved character. He’ll have a major choice to make as a result. Fans understandably feel that Nick will boot Phyllis from his life, but are uncertain if that will give Shick another opportunity to realize their long-awaited marital reunion.

Shey’s legit potential was real because of Mia’s (Noemi Gonzalez) recent, though unintended, due to mistaken identity, attack on Lola (Sasha Calle). That crime will be solved, thus reinforcing Rey’s (Jordi Vilasuso) opposition to his current wife. So Sharon might temporarily appear unavailable to Nick. However, Mia’s alleged pregnancy will likely put a crimp in Shey’s style.

Furthermore, Rey feels that Sharon betrayed his trust by withholding crucial information about the J.T. case. That plot point indicates that a triangle, with Rey and Nick battling for Sharon’s affections could be established.

Who, among all devoted Y&R fans, can honestly claim that they were hoping for a Phick revival in the first place? Hardly a popular couple at any point in past history, this mostly detested pairing reemerged last year.

Here’s hoping that TPTB, which means executive producer Tony Morina and head writer Josh Griffith, veer toward the Rey-Sharon-Nick triangle, whether or not Shick remarries in the relatively near future. This projected conflict would be intriguing and represent solid soap.