The Young and the Restless Spoilers: Eileen Davidson Returns to Y&R – Ashley Abbott Back For Surprise Visit 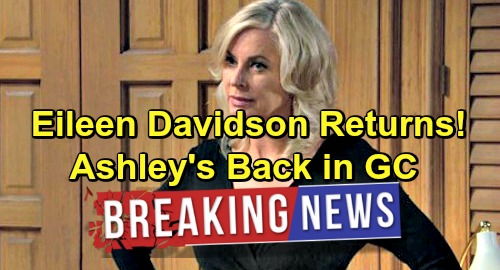 The Young and the Restless (Y&R) spoilers tease that Ashley Abbott is on her way back to Genoa City for big return. Many viewers have wondered where the Abbott sister is. As it turns out, we will find out what she has been up to and how she feels about Jack Abbott (Peter Bergman).

With all the turmoil with Phyllis Abbott (Gina Tognoni) turning on Nikki Newman (Melody Thomas Scott) and the rest of the cover-up crew, it isn’t a huge surprise Ashley will be making her way back home.

The Y&R promo showed Jack, Kyle (Michael Lealor), and Billy (Jason Thompson) plotting a way to remove Phyllis from the CEO chair. If they are successful at removing her, Ashley may have to come home to vote for the new CEO. It’s pretty much a given, at this point, she will do whatever it takes to keep her brother out of power. But, perhaps, she’s had a change of heart.

Another possibility is she is coming home for Abby Newman (Melissa Ordway) and Arturo Rosales’ (Jason Canela) wedding. No one has mentioned when the wedding will take place. It is likely it will be the feature of May sweeps. However, that assumption could be wrong.

Davidson will appear on a two-episode arc starting Thursday, March 28. The talented actress has said in multiple interviews that she is no longer interested in coming back full time, but would love the opportunity to come back for short stints.

Why do you think Ashley Abbott is coming back to Genoa City? Do you think it about the Jabor CEO spot? Don’t forget to come back to CDL later for more The Young and the Restless (Y&R) spoilers, news, and casting updates!