BY Sean O'Brien on February 25, 2019 | Comments: one comment
Related : Soap Opera, Spoiler, Television, The Young and the Restless 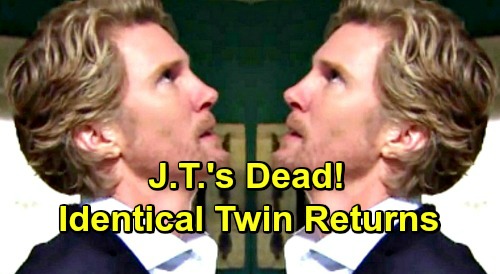 The Young and the Restless spoilers tease that Y&R may be head-faking its audience. A social media post that shows Thad Luckinbill (the late or living J.T. Hellstrom) holding a cup of coffee inside Crimson Lights is obviously meant to imply that his presumed dead character is still alive. But that seems far too obvious a conclusion at this point in the massively long and overly complicated storyline, right?

Y&R could actually present a wrap to this drawn out arc that has J.T. healthy and well. If so, some type of Bobby (Patrick Duffy) never died on Dallas scenario (circa the 1986 shower scene on that indelible nighttime steamer) might be borrowed in 2019. Those who aren’t aware of the infamous soap reference would be wise to use a search engine, as Bobby’s comeback is worth the watch and might become part of Y&R’s lore.

Assuming the above paragraph isn’t the basis of what’s to come in Genoa City, rather than just on the Southfork Ranch, then Luckinbill could have returned to the set to record scenes where he’s not alive, but merely haunting the dreams of certain coverup crew members.

It would make sense if Nikki (Melody Thomas Scott), J.T.’s accidental killer, or Phyllis (Gina Tognoni), who orchestrated his burial, would face the dead man. But Vickie (Amelia Heinle), his victim, could receive an apology. Sharon (Sharon Case) has often seen ghosts, so there’s no telling how J.T.’s spectre could approach her.

The odds that J.T. would be alive in real life are as near to zero as any soap fan could imagine. But in the land of daytime drama, or in the aforementioned nighttime soap world, Mr. Hellstrom could have survived and has come back as part of his ongoing revenge plan.

Another option would be to have Luckinbill return as J.T.’s never-before-seen twin. That would be art almost imitating life as Thad does have a real life identical twin whose first name is Trent. That Luckinbill brother appeared as an unnamed character in the background of a Y&R scene in 2005, during a period when Thad was off the show. The Luckinbill’s also played identical twins, who died, on the final episode of Law and Order: Criminal Intent in 2011.

Soaps smartly use social media as a form of advertising and fan engagement. So Y&R’s Luckinbill post, assuming it was Thad (or was it Trent?), is cool.

This buzz appears to leading into the coming climax of the J.T. Dies, but maybe he didn’t (?) arc. Whenever the final curtain falls, fans are hoping its both dramatic and digestible. CDL is a leading source for everything linked to The Young and the Restless. Check back regularly for Y&R spoilers and news!