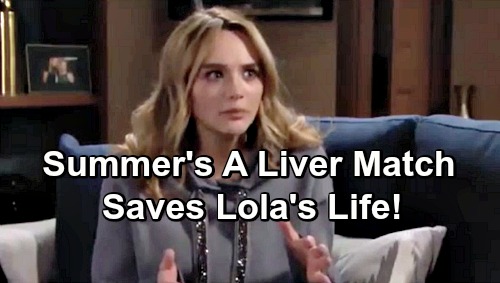 The Young and the Restless (Y&R) spoilers tease that Dr. Nate Hastings (Brooks Darnell) will grow increasingly concerned about Lola Rosales’ (Sasha Calle) health. In Tuesday’s Y&R episode, Nate reveals that Lola needs a liver transplant. She can use a living donor, so Rey Rosales (Jordi Vilasuso) and Arturo Rosales (Jason Canela) get tested right away.

Unfortunately, the Rosales brothers aren’t a match and won’t be able to save their little sister’s life. That means somebody else will have to step up and make the sacrifice. The Young and the Restless spoilers say a desperate search will soon be underway. Rey and Arturo will refuse to lose Lola like this. They’ll contact everyone they know in hopes of securing a match for Lola and preventing a grim fate.

Kyle Abbott (Michael Mealor) could be a contender here, but that wouldn’t be a huge deal story-wise. He would earn the forgiveness and approval of Lola’s brothers, but that’s about it. Lola was at the Abbott mansion to talk things out with Kyle before she was attacked. She already wanted to get back together with him. Kyle doesn’t have to prove he loves Lola, so this donor angle would fall flat.

Of course, Y&R might do it anyway, but we should explore a more complex option. Let’s consider someone who needs to earn points with Kyle and make up for some mistakes she’s made with Lola. Summer Newman (Hunter King) is typically selfish and conniving, so this would be the perfect opportunity to show her softer side.

The Young and the Restless fans will recall how Summer set off a terrible chain reaction. Mia Rosales (Noemi Gonzalez) is mainly to blame for Lola’s injuries, but Summer played a part it the danger. Lola would’ve reunited with Kyle at the cabin if it hadn’t been for Summer – and Kyle was quick to remind his ex of that.

Summer might hear about the donor search and decide to get tested. What happens if she finds out she’s a match? Summer has a shot at truly proving her feelings for Kyle. If Summer really cares about Kyle the way she says she does, she’ll want to save the woman he loves.

Kyle would be unbelievably grateful, so that’d help ease the tension with Summer. It’d also give Summer a fighting chance if Lola and Kyle can’t make it work down the road. The Young and the Restless spoilers say Summer could be turned into a viable love interest again.

Do you think Summer will be a match for Lola? Will she be the donor who comes to Lola’s rescue? We’ll give you updates as other Y&R news comes in. Stay tuned to the CBS soap and don’t forget to check CDL often for the latest Young and the Restless spoilers, updates, and news.