The Young and the Restless Spoilers: Friday, March 1 – Sharon Fights Against The Newmans – Lola Gets Surprise Volunteer 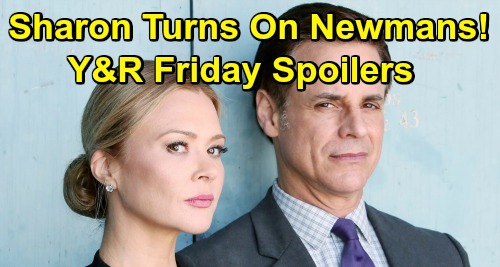 Christine will argue that she has to fight for victims, so she’ll get to work once court’s back in session. The Young and the Restless spoilers say Tessa Porter (Cait Fairbanks) will sit at the back while Mariah Copeland (Camryn Grimes) goes on the stand. Christine will get Mariah to talk about what happened that night, which won’t offer a ton of info. Mariah was passed out drunk – that much is true.

Next, Christine will play the video of Victoria, Nikki, Sharon and Phyllis moving J.T. Hellstrom’s (Thad Luckinbill) body. Mariah will dodge her questions artfully, but Michael Baldwin (Christian LeBlanc) won’t let her get by with it. On cross-examination, Michael will want to know the story of how Mariah first saw the video.

Over with Devon Hamilton (Bryton James) and Ana Hamilton (Loren Lott), they’ll get updates on Lola Rosales’ (Sasha Calle) latest crisis. Kyle Abbott (Michael Mealor) will note that time’s running out, so Lola needs a liver transplant as soon as possible. Ana and Devon will want to do help Lola, so they’ll head off to the hospital to see if one of them’s a match.

As Devon and Ana wait, Y&R spoilers say they’ll discuss their love lives. Devon will confess that Hilary Hamilton (Mishael Morgan) would be a tough act to follow. Ana will suggest she was in a relationship a while back and still needs time to heal. She’ll also mention some lingering debts she has to take care of, so she’ll be glad for this songwriting gig. Sadly, they won’t be matches for Lola.

Back with Kyle, he’ll get a visit from Summer Newman (Hunter King). She’ll note that she heard about Lola’s need for a liver and wants to see if she can donate. Kyle won’t be particularly grateful, so Summer will snap at him. They’ll end up arguing, but Summer will assure Kyle she doesn’t want to see him in so much pain.

Kyle will eventually soften and show his appreciation. While Summer awaits the results, she’ll grill Dr. Nate Hastings (Brooks Darnell) about the risks of the surgery. Summer will wonder how dangerous it is, so there’s a good chance she’ll indeed turn out to be a match for Lola. All the signs are there!