The Young and the Restless Spoilers: Alive J.T. Wants Phyllis to Pay Like the Others – Rat Fights Back in Deadly Twist? 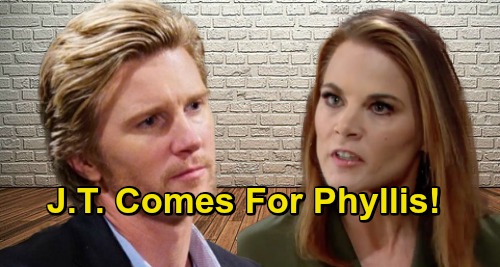 The Young and the Restless (Y&R) spoilers tease that Thad Luckinbill (J.T. Hellstrom) is headed back on screen in some form. Since the cover-up crew needs a get-of-jail-free card, it makes sense that J.T. is still alive. Of course, Luckinbill is a busy guy and probably didn’t want to appear for long. It’s not like J.T. can stick around anyway since he’s wanted for attempted murder.

That means we have to consider how J.T. will exit – for real this time! One option is that Paul Williams (Doug Davidson) will come back on the scene and arrest him. Paul is indeed returning, so Y&R might let him step up, figure this out and bring J.T. to justice.

Victoria Newman (Amelia Heinle), Nikki Newman (Melody Thomas Scott) and Sharon Newman (Sharon Case) could get off the hook for the worst of the charges. However, does throwing J.T. in prison make for a satisfying conclusion to this story? Will The Young and the Restless just lock him up and let that be the end of it? That seems disappointing when they could do something truly shocking instead.

A grim fate would be more appropriate under the circumstances. Everyone has made peace with J.T.’s dark turn in Genoa City. The people who once cared about J.T. accept that he wasn’t the same man anymore. They’ve let him go, so why not make this death stick? Perhaps J.T. will actually be killed off as this hot plot wraps up.

If that’s the case, Y&R fans have to wonder who might kill him. Victor Newman (Eric Braeden) would be a good option, but there’s someone else to keep in mind. Let’s think about this. Nikki, Victoria and Sharon are on trial and could potentially pay the price for what they did. Meanwhile, Phyllis Summers (Gina Tognoni) is as free as a bird.

Phyllis is the one person in the room that night who isn’t facing legal punishment since she decided to rat on the others. Is J.T. really going to be OK with that? Could he decide to take matters into his own hands and go after her, wanting the Rat to pay like the others? Phyllis could fight back and kill J.T. in self-defense. It might be interesting if Phyllis takes deadly action after the others go down for the same thing.