The Young and the Restless Spoilers: Kyle Scams Summer – Gets Revenge By Divorcing Her After Liver Transplant?

BY hellodrdavis on March 11, 2019 | Comments: 3 comments
Related : Soap Opera, Spoiler, Television, The Young and the Restless 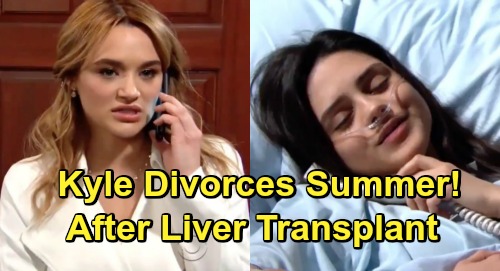 The Young and the Restless spoilers tease that Kyle Abbott (Michael Mealor) is a man with a plan. He’s head-over-heels in love with Lola Rosales (Sasha Calle) but Lola’s got a big problem. She’s in desperate need of a liver transplant, and it’s been difficult to find a donor. Neither Rey Rosales (Jordi Vilasuso) or Arturo Rosales (Jason Canela) were a living donor match, and the search finally led to a surprising match…Summer Newman (Hunter King).

But devious Summer won’t go through with the transplant unless she gets what she wants, and what she wants is to marry Kyle. Although Summer does truly love Kyle, she’s also being remarkably selfish by withholding her liver from her rival Lola unless she becomes Mrs. Kyle Abbott. But Kyle is desperate, and so he agreed to marry Summer if it would save Lola.

Summer and Kyle entered into an agreement that the two would remain married for one year, and if they weren’t happily in love at the end of that year, they’d go their separate ways with no questions asked. Of course, Summer knows that this will kill any chance of Kyle having a relationship with Lola going forward, and that’s why she’s so keen on the deal. It’s a devious move on Summer’s part.

But maybe Kyle will be devious as well. Summer and Kyle’s deal is based on the honor system, so Summer’s banking on the fact that Kyle will honor the agreement to stay married for a year once she goes through with the transplant surgery. In fact, Summer hasn’t even considered the possibility that Kyle might bail on the deal once he gets what he wants.

But would Kyle really leave Summer and go back to Lola as soon as the transplant surgery is over? Kyle’s generally a stand-up guy and the type of person who would live up to the letter of an agreement, but this is a unique situation. Y&R fans have seen Kyle work against his own dad with Victor Newman (Eric Braeden) in a misguided power move so we know he’s certainly capable of deceit.

Summer is partly responsible for Lola being in need of a liver transplant in the first place – after all, if Summer hadn’t lied at the cabin and insinuated that she and Kyle were back together, Lola wouldn’t have left in a huff and been in a position to be attacked.

So, Kyle may figure that it will serve Summer right to get tricked into giving up a part of her liver to Lola. And what consequences could Kyle possibly face? Sure, Summer could fight him if he tries to get an annulment or a divorce, but ultimately what would she really be able to do about it?

We’ll see exactly what Kyle does, but we wouldn’t be surprised if he ends up deceiving Summer and filling for an annulment as soon as the transplant surgery is over. Do you think Kyle would do this to Summer? Stay tuned to the CBS soap and don’t forget to check CDL often for the latest Young and the Restless spoilers, updates, and news.