BY Heather Hughes on March 11, 2019 | Comments: one comment
Related : Soap Opera, Spoiler, Television, The Young and the Restless 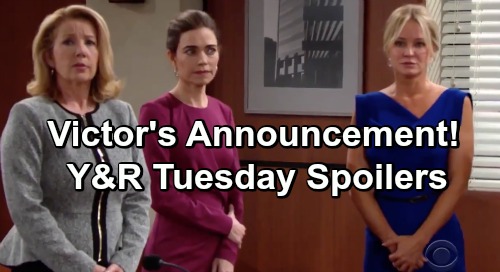 The Young and the Restless (Y&R) spoilers for Tuesday, March 12, tease that Jack Abbott (Peter Bergman) will want to seal the deal on an alliance. He recently got Kerry Johnson (Alice Hunter) on board with his takedown plan. In exchange for an offer in writing, Kerry assured Jack she’d join his team.

Since Jack’s fallen hard for Kerry, he trusts her to keep her end of the bargain. However, a little insurance policy never hurts. Jack will likely remind Kerry of how important this is and perhaps throw in some added benefits for her. He’s determined to oust Phyllis Summers (Gina Tognoni) and preserve his family’s legacy, so he’ll grow even more confident that it’s going to happen.

Unfortunately, Jack doesn’t know Kerry is scheming behind his back. She’s playing both sides, but her real partner is someone mysterious. Ashley Abbott (Eileen Davidson) is a good possibility since she’s returning later this month, but anything is possible on the CBS soap. Y&R fans will be eager to see who Kerry’s working with and why he or she’s so determined to make these dirty moves.

Meanwhile, the cover-up crew will await the verdict. The Young and the Restless spoilers say it’ll be a stressful time for Nikki Newman (Melody Thomas Scott), Victoria Newman (Amelia Heinle) and Sharon Newman (Sharon Case). Victoria and Nikki will lash out at Sharon for letting Rey Rosales (Jordi Vilasuso) manipulate her. They’ll grumble about the possibility that Sharon will have a different outcome.

Things will be quite icy in the courthouse holding room, but the tension will lift a little later. Their defense strategies may have been different, but they’ve all been living the same nightmare since they buried J.T. Hellstrom (Thad Luckinbill). Victoria will ultimately acknowledge that the truth was bound to come out somehow. If Sharon hadn’t cracked, there would’ve been something else to trip them up.

Y&R fans can expect Victor to visit the ladies eventually and announce that he will do everything in his power to help the, so Nikki and Victoria should get some comfort. Over with Abby Newman (Melissa Ordway), she’ll deal with some suspicions. This probably involves Summer Newman (Hunter King), who’ll inevitably be gloating about her rushed wedding to Kyle Abbott (Michael Mealor). This marriage will make absolutely no sense to a stunned Abby.