The Young and the Restless Spoilers: Jack Devastated By Kerry’s Betrayal – Entire Romance Was A Scam

BY hellodrdavis on March 11, 2019 | Comments: 2 comments
Related : Soap Opera, Spoiler, Television, The Young and the Restless 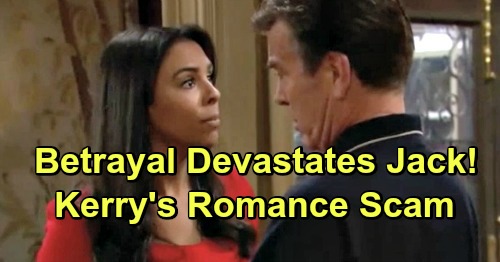 The Young and the Restless (Y&R) spoilers tease that Jack Abbott (Peter Bergman) is in for an unpleasant surprise. He has been thoroughly enjoying his whirlwind romance with Kerry Johnson (Alice Hunter), and the two seem to be getting serious. Sure, they had a little hiccup when Jack found out that Kerry was freezing her eggs, but ultimately they decided that their relationship was worth fighting for.

And now Jack and Billy Abbott (Jason Thompson) are enlisting Kerry in their plan to oust Phyllis Summers (Gina Tognoni) as CEO of Jabot. It took a considerable amount of convincing by Jack, but Kerry finally got on board with Jack and Billy on the plot. Of course, in true Kerry form, she wanted a deal in writing, and Jack was happy to oblige.

But then it was revealed that Kerry’s true allegiance is to an outside partner who she’s been secretly communicating with. It appears that Kerry is leading both Jack and Phyllis to think she’s on their side, when in reality a person on the outside is pulling the strings. And it certainly seems like that person will turn out to be none other than Ashley Abbott (Eileen Davidson), who’s slated for a Y&R return very soon.

It appears that Ashley has nefarious plans for Jabot, and that she’s been getting inside information from Kerry all along. Of course, Ashley started a new competing cosmetics company called “My Beauty” when she left Genoa City, and she’s likely been getting updates from Kerry on Jabot’s business plan and its upcoming products.

All of this is going to crush Jack when the truth comes out. He’ll be forced to face the fact that Kerry and Ashley have been working him from the beginning, and that his entire relationship with Kerry has been nothing more than a scam. And Kerry really played the part well, allowing Jack to woo her and take her on lavish vacations.

Jack will be devastated, and once again he’ll have been bested by Ashley. It was bad enough when he discovered last autumn that Ashley had led him to believe that he wasn’t a “real” Abbott. Ashley will have once again toyed with Jack’s emotions in the worst way possible.

It will be interesting to see how Jack responds to this big revelation. He basically let Ashley get away with her previous deception without any retribution, but chances are he will be on the warpath after Ashley and Kerry’s new round of deception comes to light.

How would you like to see Jack get revenge on these two? Stay tuned to the CBS soap and don’t forget to check CDL often for the latest Young and the Restless spoilers, updates, and news.