The Young and the Restless Spoilers: Sharon Forgives Nick For Phyllis Affair – Exes Mend Fences Ahead of Devastating Guilty Verdict

BY hellodrdavis on March 10, 2019 | Comments: one comment
Related : Soap Opera, Spoiler, Television, The Young and the Restless 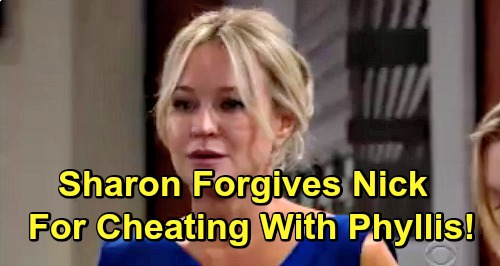 The Young and the Restless spoilers tease that Sharon Newman (Sharon Case) will want to get her affairs in order before the verdict in the J.T. Hellstrom (Thad Luckinbill) murder trial comes in. She has been sitting on pins and needles throughout the trial, and it certainly looks like she, Nikki Newman (Melody Thomas Scott), and Victoria Newman (Amelia Heinle) are going to be found guilty in the case.

She and Nick Newman (Joshua Morrow) haven’t interacted much since it came out that she was involved in covering up J.T.’s death, largely because Nick was paired up with Phyllis Summers (Gina Tognoni), but that will soon change. Sharon and Nick will catch up and have a chat about everything they’ve been through in the past few months.

Of course, “Shick” has some serious drama last year, when Sharon found out on their wedding day that Nick cheated on her with Phyllis. Sharon called Nick out on his behavior at the altar, and it was quite the scene. But it seems that enough time has passed that Nick and Sharon are able to talk about the event without fighting.

Since she’ll know that she’s facing some serious prison time, Sharon will want to settle things with Nick once and for all. She won’t want to go to prison with bad blood between them, and she’ll tell Nick that she forgives him for his affair with Phyllis and that she wants to put the whole thing behind them. She doesn’t want to hold the grudge any longer.

Sharon will also have Faith Newman (Alyvia Alyn Lind) on her mind, and she’ll want to make sure that Nick will take care of their daughter while she’s in prison. Nick will reassure Sharon that Faith will be fine and well-cared-for, but he’ll also promise that he’ll do everything in his power to get Sharon out of prison.

Of course, Nick is under the belief that J.T. may still be alive, so he’ll probably work on that angle after the ladies are found guilty and sentenced. But we have to wonder whether Nick and Sharon may have a future ahead of them once Sharon’s eventually set free and the dust has settled.

Do you think “Shick” has a future ahead of them? Stay tuned to the CBS soap and don’t forget to check CDL often for the latest Young and the Restless spoilers, updates, and news.