The Young and the Restless Spoilers: Christine and Paul Track Down J.T. Hellstrom – Find Justice For The Newmans?

BY Sean O'Brien on March 9, 2019 | Comments: one comment
Related : Soap Opera, Spoiler, Television, The Young and the Restless 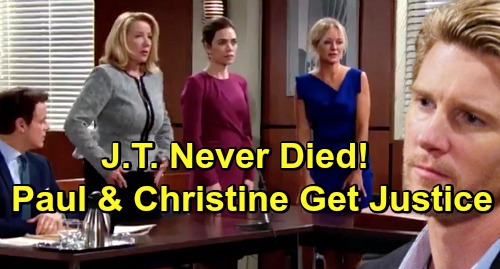 The Young and the Restless spoilers tease that Christine (Lauralee Bell) may well win at least one conviction, if not more, despite the Newman’s belief that special rules should be applied. The trial involving the seeming death of J.T. (Thad Luckinbill) moves toward a conclusion with serious consequences resulting. In the end, even the Newman family could be surprised by Christine’s measured actions.

It’s no secret that Victor (Eric Braeden) lives his life by a special set of rules. Christian Miller dubbed himself a so-called victorious (Victor) new man (Newman) years ago and then appeared one day in Genoa City, circa 1980. He met and married a young lady who was compelled to kill her father. That was the first of what have now become three self-defense deaths in the nee Nicole Reed’s life.

Meanwhile, Christine continues to fight for justice. Of course, her views are shared by other rational minds in GC. Together, they believe that it was necessary for Nikki (Melody Thomas Scott) to have reported what she did to J.T. to the authorities. All honest individuals also wouldn’t have dug a hole in Katherine Chancellor (Jeanne Cooper) Park and then thrown in the lamentable Mr. Hellstrom. But hey, the Newman’s deserve special consideration, right?

GC’s District Attorney does not possess a character flaw. She’s not jealous of the Newman’s wealth and power. Instead, she believes that all people are equal and that everyone deserves to be dealt with fairly. Her husband, Chief of Police Paul Williams (Doug Davidson), agrees.

J.T. can’t live twice. He’s dead and won’t be resurrected. As such, Christine speaks for him, since he can’t.

The above mini-paragraph is probably the best possible out that Nikki has, as all supporters of this great escapist genre know. It’s true that J.T. can’t live twice and won’t be resurrected, as this daytime drama isn’t the classic Dark Shadows, or the more recent Passions. However, it’s possible that J.T. never died, or wasn’t the man Nikki hit with that fabled fireplace poker.

A truly shocking twisted ender to this long arc will have Chris and Paul applying justice to whoever has been tormenting the Newman family and moved whatever body was placed into the unlawful grave. If that person (or more than one person) proves to be J.T., then one of the more unusual mysteries in all of Y&R history will be solved.

Assuming the projection in the above paragraph proves true, Christine’s mettle will be tested and likely confirmed as fully solid. She will promote justice within the legal system for whoever broke the law, even if that was done against the Newman family.