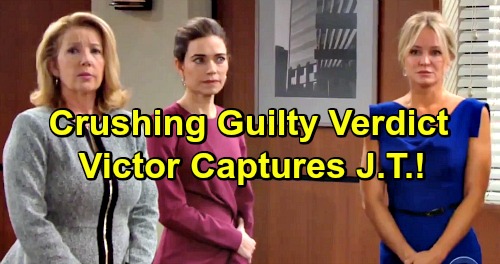 The Young and the Restless (Y&R) spoilers tease that Victoria Newman (Amelia Heinle), Nikki Newman (Melody Thomas Scott) and Sharon Newman (Sharon Case) will head back to the courtroom. The jury will be ready to deliver their verdict, so the women will be filled with fear. They’ll realize things got awfully ugly at certain points in the trial. The possibility of a guilty verdict will be all too real.

Unfortunately, that’s the outcome these ladies will face. Y&R spoilers say there’ll be a shocker that affects the verdict somehow, but it won’t change the fact that they’ll be declared guilty. After the verdict is read, Victoria and the others will have to await sentencing.

Billy Abbott (Jason Thompson) will speak up for Victoria and try to push for a light punishment. He won’t want the mother of his children taken away. Billy was hoping to reunite with Victoria eventually, so this will break his heart in more ways than one. He’ll assure Victoria that no matter what happens, he’ll make sure the kids are always taken care of.

Meanwhile, Sharon will share some sweet moments with Nick Newman (Joshua Morrow). He hasn’t been the same man over the last few months, but he’s got a soft spot for his ex. Nick still loves Sharon deep down, and it’s safe to say she loves him, too. They couldn’t make it work romantically this time around, but there’ll forever be a deep bond between them.

The Young and the Restless spoilers say Nick and Sharon will put any past issues behind them. Sharon won’t know how long she might be behind bars for, but she won’t want to take any grudges in with her. They’ll undoubtedly discuss Faith Newman (Alyvia Alyn Lind) as well. Sharon will count on Nick to be there for their daughter if she faces a lengthy prison sentence.

Of course, Victor will also support Nikki. He’ll visit his love and apologize for letting it get this far. Victor can often make just about any problem go away, but he struggled with this one. Nikki and the others made quite a mess for themselves.

However, it’s never too late for Victor to fix a crisis! The Young and the Restless spoilers say Victor will promise to make the person responsible for their imprisonment pay. Since that’s probably J.T. Hellstrom (Thad Luckinbill) himself, tracking the tormentor down could save the women from serious jail time.

Regardless, The Young and the Restless spoilers say Victor will play the hero at the end of all this. He’ll step up and help the women overcome their terrible predicament, so he may score J.T.’s capture. We’ll give you updates as other Y&R news comes in. Stay tuned to the CBS soap and don’t forget to check CDL often for the latest Young and the Restless spoilers, updates, and news.