The Young and the Restless Spoilers: Wednesday, January 30 – Jack Decides With Kerry On Kids – Victoria Confides in Dad

BY Kinsley Goldman on January 29, 2019 | Comments: one comment
Related : Soap Opera, Spoiler, Television, The Young and the Restless 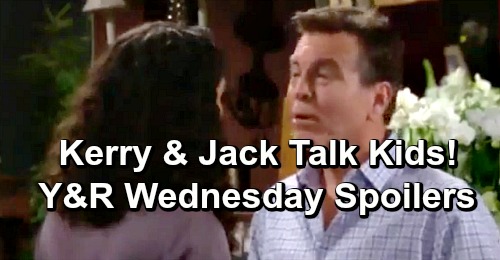 The Young and the Restless (Y&R) spoilers for Wednesday, January 30, tease that Summer Newman’s (Hunter King) true motives will be revealed. After she runs into Fenmore “Fen” Baldwin (Zach Tinker), Summer will take a moment to catch up with him. She’ll quickly realize they have something in common, so she’ll hope to take advantage of that.

Both Fen and Summer would like for Kyle Abbott (Michael Mealor) and Lola Rosales (Sasha Calle) to break up, so Summer will think they can help each other out. Of course, she may not spell out her plot just yet. Summer may not even know what it is yet! However, she’ll at least know she wants Kyle back and will do just about anything to make it happen.

Other Young and the Restless spoilers say Victoria Newman (Amelia Heinle) will confide in her father. Victor Newman (Eric Braeden) will want to be there for Victoria as she shares how she’s feeling. Now that he’s under house arrest, Victor’s using this as an opportunity to focus on his family and be supportive whenever they need him.

Victoria may admit she’s not doing the greatest. She’s been stressed to the max for months and her love life’s a train wreck. Victor may worry he’s pushing Victoria too hard by asking her to take on the Newman CEO position. He might give her the chance to back out, but she’ll probably stick with it. Victoria may think it’ll be a good way to distract herself from her personal problems.

Over with Jack Abbott (Peter Bergman) and Kerry Johnson (Alice Hunter), they’ll have a significant choice to make. In Tuesday’s Y&R episode, Kerry admits the syringe was for hormone shots. She hopes to freeze her eggs in case she wants to have a baby someday. Jack wasn’t planning on having any more kids, so he has concerns about staying with someone who has such a different life path mapped out.

That’s why they’ll have another honest conversation on Wednesday’s new Y&R episode, January 30. Jack and Kerry will need decide if they want this relationship to go any further. If they fall harder for each other, it’s only going to hurt worse if they have to split later. Kerry and Jack will keep that in mind as they consider what’s next romantically.

Will Jack and Kerry part ways or keep dating until Kerry figures out if a baby is really what she wants – could Jack change his mind about having more kids? The Young and the Restless spoilers say some hot drama’s ahead! We’ll give you updates as other Y&R news comes in. Stick with the CBS soap and don’t forget to check CDL often for the latest Young and the Restless spoilers, updates, and news.